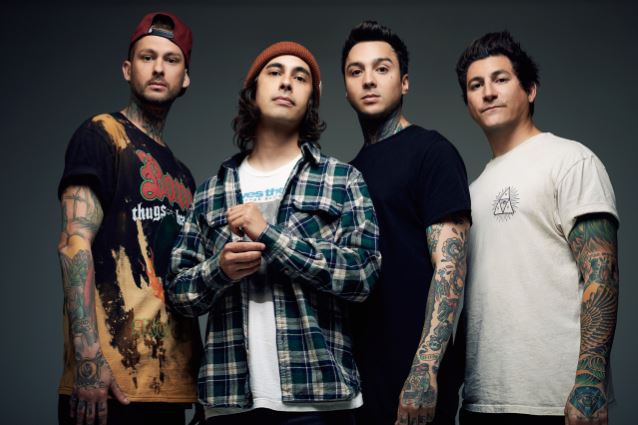 California-based progressive post-hardcore band PIERCE THE VEIL has just released a video clip that tells the story of the inspiration and recording of their new single "Circles". The song is taken from the band's brand new album, "Misadventures", which was released on May 13 via Fearless Records.

Inspired by last fall's horrific terriorist attack in Paris, "Circles" tells a hypothetical tale of two friends at the EAGLES OF DEATH METAL show and how they tried to save each other as the onslaught was taking place. "I watched the EAGLES OF DEATH METAL talk about what happened," said PIERCE THE VEIL's lyricist Vic Fuentes. "They said a lot of people died trying to save their friends, and that just really affected me, thinking about these kids at a rock show trying to save their friends. And I realized that could have been our band or any of our friends' bands, and the whole situation really hit me hard."

"Circles" is currently in regular rotation on 21 alternative and active rock radio stations across the country, including 91X, the influential alt/rock station in the band's hometown of San Diego, and Los Angeles powerhouse KROQ-FM where the song has been #1 on the program "Furious 5 @9". The song and an interview with the band will be featured on the nationally-syndicated radio program "Out of Order" this weekend.

PIERCE THE VEIL will perform "Circles" on "Conan" next Monday, June 27 (TBS, 11 p.m./10 p.m.Central). The band is currently in the home stretch of their sold-out U.S. concert tour where they are playing "Misadventures" live from start to finish.