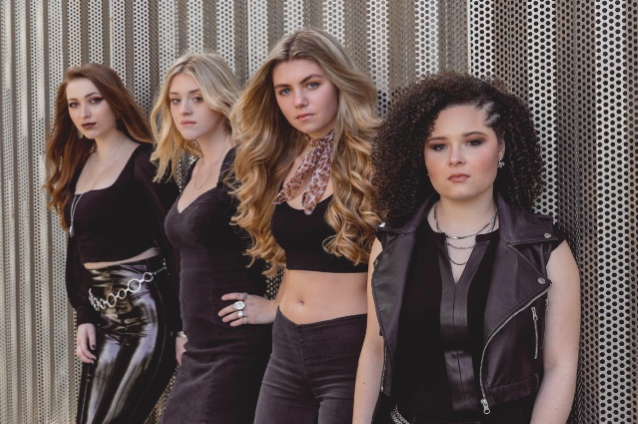 Upstate New York all-female rock band PLUSH has entered the studio with producer Johnny K (STAIND, 3 DOORS DOWN, DISTURBED) to record its debut album, to be released this fall on Pavement Entertainment.

Having formed during the COVID-19 lockdowns, PLUSH released its first single, "Hate", earlier this year, which has climbed to No. 29 on the Billboard Mainstream Rock chart. PLUSH has been making headlines throughout the rock scene, being one of the first all-female rock bands under the age of 21 to emerge in some time.

The ladies of PLUSH are thrilled about going into the studio to record a full-length album. Vocalist/guitarist Moriah Formica says: "I'm super excited to get into the studio with my bandmates! We have a mix of some heavy songs, as well as some ballads. Can't wait for everyone to hear the finished product!"

Drummer Brooke Colucci adds: "Recording our own album is a dream come true! Working with Johnny K in the past was an absolute pleasure and I'm so honored to be able to work with him again! Super excited to get into the studio and put out some new music!"

Bassist Ashley Suppa shares: "This journey feels more and more unreal each day, and it's been an absolute pleasure to work alongside such incredibly talented bandmates. Our first album means so much to each of us, and we hope that it will to everyone else as well."

Fans of PLUSH have been eagerly anticipating new music from the band. To give them a taste of what's to come, PLUSH has put together a preview of three new songs that will be featured on the upcoming album.

PLUSH is also gearing up for some live shows. To kick off the summer, the following performances have been announced for 2021, including an exciting full-blown USA tour to be announced soon.

In addition to the summer dates, PLUSH has announced its inclusion on the Voragos rock festival, which will be a unique vacation experience that will take place on a cruise ship February 16-21, 2022 and feature performances from ROB ZOMBIE and CHEVELLE, among many others.