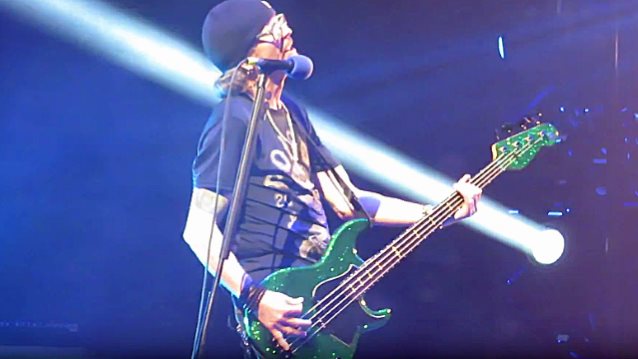 POISON bassist Bobby Dall has told The Washington Times that he is reluctant to sign many items of memorabilia for "fans" he believes to be professional autograph seekers, only to see those same articles sold online at exorbitant prices.

"I'm not going to sit there and sign 30 things for someone to get rich off of me," Dall said, "but I don't mind signing one [item]. That's my rule."

Likewise, Dall said that while he generally tries to grant the wishes of fans who approach him on the street for photos or autographs, there are times when he doesn't want to be bothered.

Many celebrities, including some musicians, have become unwilling in years to sign memorabilia, knowing the second they sign their name, the value of that item increases considerably. The introduction of the private signing culture means that some stars will only sign more than one item if they receive a fee for their autograph.

Some stars try to thwart the professionals by putting a personal inscription on their photos. Others simply refuse to cooperate with autograph seekers.

POISON's reunited original lineup — Dall, Bret Michaels, Rikki Rockett and C.C. DeVille — kicked off its North American tour with DEF LEPPARD on April 8 at the SNHU Arena in Manchester, New Hampshire. The trek will wrap on June 25 in Indianapolis, Indiana.