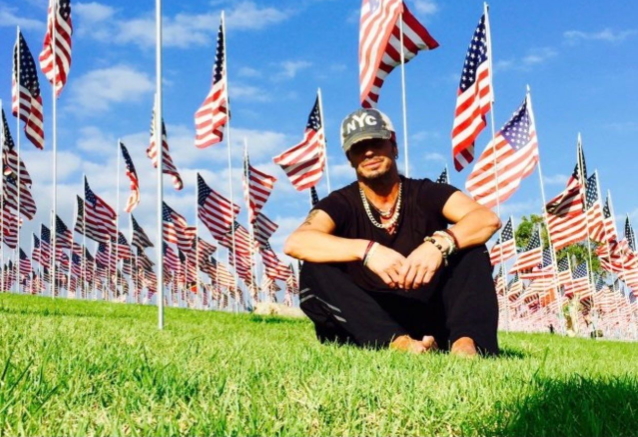 POISON frontman Bret Michaels, fresh off his band's "The Stadium Tour", is joining forces with the Tunnel To Towers Foundation for the "Homes For The Holidays" television series. Michaels will be featured in the holiday TV special, giving Gold Star and fallen first responder families the ultimate holiday gifts — mortgage-free homes.

Michaels states: "As the son of a veteran and coming from a family of veterans, first responders, frontline workers, teachers, and utility workers, I could not be more honored to join forces with Tunnel To Towers and give back to the men and women who have selflessly sacrificed so much for our freedoms. In this holiday season, I would ask you and your family to consider giving back to these amazing veterans and first responders."

Michaels, a lifelong diabetic, understands daily struggles and keeps an unbroken fighting spirit to inspire a "victory over victim" spirit. He is no stranger to advocating for veterans and first responders. He comes from a long line of military vets, including his Uncle Nick who was killed in action at the Battle Of The Bulge, and his Uncle Bobby who is a twice-honored Purple Heart recipient. Michaels has given his support to events such as the Military Child Of The Year, Gold Star families events, Operation Home Front, and performing at forward-operating bases in Iraq, Afghanistan, Kuwait, and Abu-Dhabi. He also joined his hometown football team, the Pittsburgh Steelers, during their Monday Night Football Salute To Service game where, with Steelers great Rocky Bleier, he honored those who have served including Michaels's late Navy veteran father Wally Sychak with a personal dedication and donation to Wally's VFW Hall. Michaels also dedicated his "Hometown Heroes" tour to veterans, military members, and their families in November 2019, inviting service members and first responders to be recognized on stage during his performances as he has throughout his career. His highly anticipated 2023 "Parti-Gras" world tour will also include incredible giveback to veterans with tickets and contributions to veteran charities. The all-killer, no-filler music festival will be a night of big hits and big fun that is hosted, created by, and featuring Michaels. Stay tuned for more information on artists and select dates on BretMichaels.com coming November 28.

Michaels has personally, and through his Life Rocks Foundation, helped to raise millions of dollars for causes such as childhood cancer, Wounded Warriors, St. Jude Children's Hospital, PetSmart Charities, and diabetes awareness. He even visited Luke Air Force Base in 2020 to help open the first-ever DOCS family dental clinic. Bret, hard-working and built from the ground up, comes from a small town in Pennsylvania and has always been a hands-on rocker. Recently coming off his hugely successful "The Stadium Tour", Michaels will also join forces with the FDNY this holiday season and ask them to put him to work — BBQing, serving food to veterans, and helping construct their facilities.

"Homes For The Holidays", which features intimate musical performances, was filmed all over the U.S., including in the ruggedness of Idaho; a Columbia, Tennessee church turned music venue, The Mulehouse; Santa's Pub in Nashville; at a beautiful church in New Jersey; and backstage before a concert in Kentucky. "Homes For The Holidays" is part of Tunnel To Towers' "Never Forget" series.

Since September 11, 2001, Tunnel To Towers has been helping America's heroes by providing mortgage-free homes to Gold Star and fallen first responder families with young children and by building custom-designed smart homes for catastrophically injured veterans and first responders. Throughout the special, families will share their stories and talk about how the organization has impacted their lives.

"Homes For The Holidays" will air from Thanksgiving weekend through New Year's Day across multiple network affiliates, including Fox, Scripps and Gray stations. It will also air on the Circle Network and AXS TV. Check local listings to see when it airs in your area.

The Tunnel To Towers Foundation is dedicated to honoring the sacrifice of FDNY firefighter Stephen Siller, who laid down his life to save others on September 11, 2001. For more than 20 years, the Foundation has supported our nation's first responders, veterans, and their families by providing these heroes and the families they leave behind with mortgage-free homes.