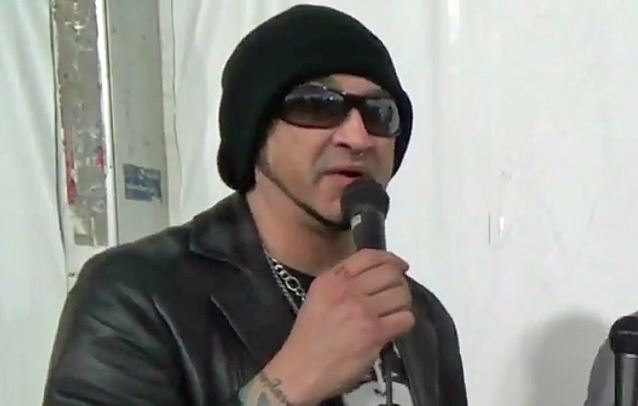 HELLYEAH's forthcoming fifth album, "Unden!able", will feature a cover version of the song "I Don't Care Anymore", which was written, performed, and produced by English singer-songwriter Phil Collins, having originally appeared on his second solo LP, "Hello, I Must Be Going!" (1982).

According to HELLYEAH guitarist Tom Maxwell, his band's version of the track will feature a special guest. He told the 97.7 WQLZ radio station at this year's Rock On The Range festival: "Dime [late PANTERA guitarist 'Dimebag' Darrell Abbott] and Vinnie [Paul Abbott, former PANTERA and current HELLYEAH drummer] recorded that track years ago and we went in and dug up his tracks and put it on the record, man. So we've got a little Dime… Dime's on our album."

"It's just an honest record, man," Tom stated about "Unden!able". "We just went in there and didn't know what we were gonna do. I was pretty bitter after eighteen months on the road and then having to go directly in the studio. I think we just matured, man. We're writing some of the most savage music, we're digging deep and reinventing ourselves on some things. And it's just exciting, man. We've just got some great songs."

"A producer is a very loosely thrown around word," Tom said. "There's a lot of people out there that say they're producers but what they are is just glorified engineers. Kevin is a musician, a songwriter, an engineer… all that stuff. He's a great singer. And working with somebody like that… I mean, yeah, he's known to be the hit guy and he's got all these records, but with us, he treats us very differently, 'cause he knows we're just all about razor blades and fistfights. So he comes in and does his thing with Chad [Gray, HELLYEAH singer], and he lets Chad be Chad. And… I don't know… I mean, for us, he's just like another member of the band."

He continued: "When I worked with him, it was the first time working with a producer that actually is a songwriter, that I could bring one little riff or idea to, and two days later we have this incredible song built. And that's what, to me, is so special about him. And I'll never record with any other producer. I'm done. That's it."