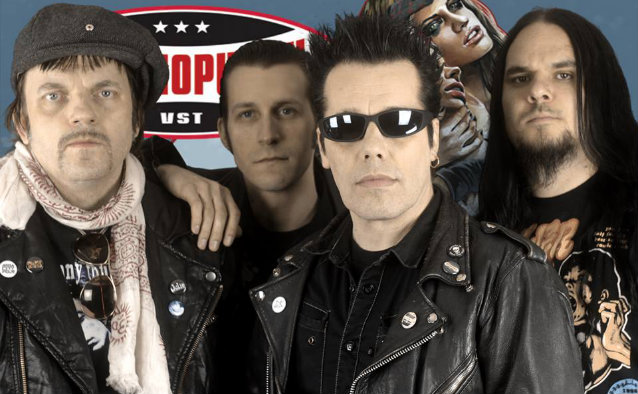 "Sitting By The Railroad", the new video from Swedish rock and rollers PSYCHOPUNCH, can be seen below. The clip is the third video in a series of three (along with "Last Night" and "So Jaded") that, if put together, make a short film. Andreas "Ogrindo" Ekvall produced all three videos.

All three songs are taken from PSYCHOPUNCH's latest album, "Smakk Valley", which was released on February 25 via SPV/Steamhammer.

With the band's typical mix of full throttle and diversity, toughness and melodies, simplicity and complexity, PSYCHOPUNCH have produced an album full of highlights. Be it with their typical straightforwardness on tracks such as "Last Night" and "Back Of My Car", or mercilessly driving on "So Jaded", "Kick In The Head" and "I Will Never Ever", PSYCHOPUNCH always hit the golden mean between raw ferociousness and concentration on the things that really matter. In addition, "Smakk Valley" features a number of surprising moments: despite its slightly slower pace, "Sitting By The Railroad" impresses with its amazing power and gritty melodies, while the unusual "Emelie" impresses with its — as bassist Lindell calls it — "great country rock'n'roll bad-ass feeling. I get a big smile on my face every time I hear it."

"We tried to make and give every song that little bit extra special and I think that we've succeeded in doing that," guitarist/vocalist JM explains the band's special philosophy which in the end always shines through on PSYCHOPUNCH's material. Drummer Jocke describes "Smakk Valley" as consisting of "powerful songs with strong and catchy melodies," while Lindell considers PSYCHOPUNCH first and foremost a "great and honest no-bullshit rock'n'roll punk powerpop band" that keeps the spirit and tradition alive from such bands and artists as the RAMONES, SEX PISTOLS, JOHNNY THUNDERS, NEW YORK DOLLS, CHEAP TRICK, CHUCK BERRY, IGGY & THE STOOGES, GENERATION X or THE CLASH. "This list could go on forever, and we don't think our attitude has changed over the years in terms of wanting to be a great live band that makes people happy and gives them a chance to forget about their problems."

"Smakk Valley" was produced by PSYCHOPUNCH's longtime friend Pelle Saether, who has been part of the band's inner circle for years. Saether knows how to handle the group, he knows all about their moments of euphoria and exuberance which can easily turn into self-doubt and dissatisfaction in view of the great significance of album productions if there's nobody there to indicate the general direction. "We had some fantastic and some bad times at the studio," JM admits, "but most of it was fun. We had high expectations of ourselves. Pelle is always a great help to us. He and I worked really hard with the vocal melodies on the choruses to get the most out of every song. All in all we are very happy with the outcome of the new album, so it was well worth the pain."

But back to the question of the band's amazing output and the energy source which has fed their haunting new album "Smakk Valley". "To be honest, I sometimes wonder where we get the power from," JM admits, "but in the end I think it has to do with the fact that we love what we do. We all have our roots in punk rock, rock'n'roll, hard rock and metal. So making people feel good and having a great time, that's what gives us boundless energy!"