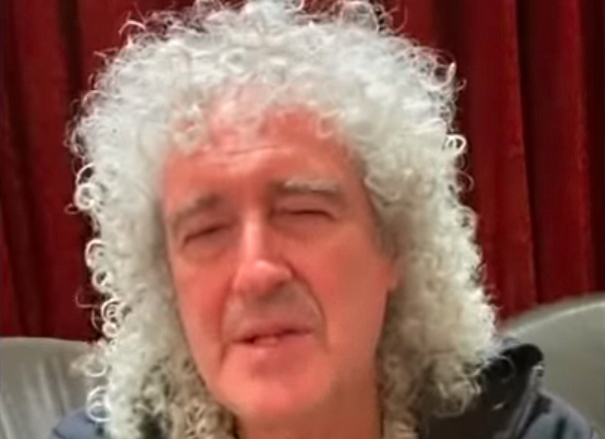 QUEEN's BRIAN MAY On BORIS JOHNSON's Hospitalization: 'I Had A Feeling He Wasn't Doing Too Well'

QUEEN guitarist Brian May has reacted to the news that U.K. prime minister Boris Johnson was moved to intensive care on Monday after being admitted to a hospital on Sunday because of worsening coronavirus symptoms.

Earlier today (Tuesday, April 7),May released a video message in which he said: "I just wanted to send my prayers to Boris Johnson and his family. It must be an awful thing to be going through. I had a feeling he wasn't doing too well, looking at his message on the TV a couple of days ago. I just thought, 'He doesn't look good.' And he was being very brave… But I felt he was struggling.

"To me, it highlights something which I've noticed," May, who is also an astrophysicist, continued. "Now, this is anecdotal — it's not what scientists would call evidence of any kind — but a lot of good scientific thoughts begin with something which is just a feeling, an instinct. And it seems to me that something very curious is going on with the virus, which hasn't really been investigated, and that's the fact that there seems to be a sharp dividing line between the people that it infects very midly and the people to whom it becomes an enormous threat and can kill. This is quite unusual.

"I'm not an immunologist — I don't pretend to be — but I spent a lot of time now studying the transmission of bovine TB in cattle. This is something quite similar. This is an effect that you don't see in many infectious diseases — usually they wipe out a certain percentage of people rather indisriminantly, which is not the case with this virus. In the beginning, people thought it was just about age, and then it was, 'Well, there might be underlying symptoms.' But it seems to me there's much more going on than this, because there is this sharp divide. Why is it that with some people, and particularly men, it takes a grip and really makes them struggle for life, because the lungs fill up. And other people really get only very mild symptoms; some people don't even know that they've got it.

"Now, it seems to me there must be some answer here," the guitarist, who lives in London, added. "There's a big question to ask here at the very least: why would this happen? Is it because there's more than one strain of the virus? I don't think so; I think that would have shown up. Is it because there is something in the genome or the makeup of certain people which gives them a resistance.

"Now, you're looking at something really which is a natural immunity here. And, again, I haven't seen this discussed in the media. Some people, particularly women, come through it really without much more than a bit of a temperature and a cough and a headache, and then soon they're fine. Is there something in their makeup which makes that happen? It seems to me if we could find the answer to this strange quirk in this particular coronavirus, this behavior, we could find a clue — a very important clue — to solving the problem of how to deal with it. If you can isolate what it is which gives people immunity naturally, then you could roll it out maybe sometime in the future and make everybody have that same immunity."

Johnson, 55, is not on a ventilator and doesn't have pneumonia but has needed oxygen support while in the intensive care ward, a government spokesman said.

As of Monday, the United Kingdom had 47,806 confirmed coronavirus cases and 4,934 deaths.