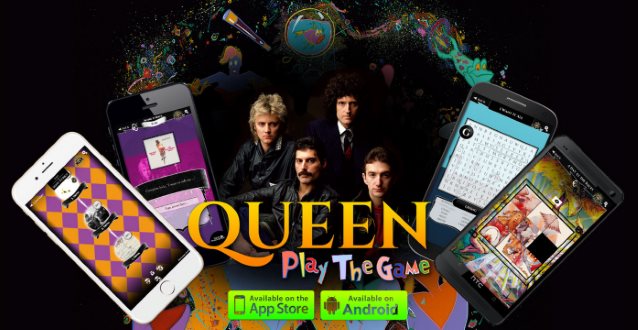 QUEEN's brand new and only official game is now available on both the Apple and Google app stores. Solve puzzles, complete trivia and win real-world QUEEN merchandise, all with QUEEN's original music.

Queen: Play The Game is QUEEN's first official app and is a digital puzzle and trivia game for smartphones and tablets. With beautiful imagery from QUEEN's official archive, re-sampled sounds from all the hits and many recordings you may not have heard, this is a truly unique QUEEN experience. Test your knowledge of the band, solve puzzles, unlock official artwork, discover new music and win real official QUEEN merchandise.

This app contains thousands of images, music clips and facts from the official QUEEN archive. Complete sections of the game and you'll also be entered into competitions to win real-world high-value packs of official QUEEN merchandise. The game runs on both Apple's iOS operating system and Google's Android so most modern smartphone and tablet users will be able to play.

This game has everything for the QUEEN fan, young and old and evolves over time with new content and game modes added regularly. How much do you know about QUEEN's; songs, albums, tours, band members, producers, live gigs, studios, history, instruments, tastes etc? Whatever your level of knowledge you are sure to unlock some surprising facts about these most iconic of British rock bands.

If you're a casual QUEEN fan, or indeed are just starting on your journey with their music, you will learn more about the band from this game than perhaps anywhere else.

If you're already a seasoned expert, well there's an entire expert mode, especially for you. Are you one of the few people on the planet that can complete the whole game on expert, first time through?

Queen: Play The Game has been created by SoshiGames of Birmingham in the U.K., a company focused on making games for artists and who worked very closely with QUEEN's official archivist and management team. "It was very important for us to be able to use only official QUEEN imagery and the band's incredible portfolio of music," says Cliff Dennett, CEO of SoshiGames. "We wanted to create an authentic and high-quality experience for the fans, befitting of a band with the stature of QUEEN."

Greg Brooks is QUEEN's official archivist and has curated a lot of the content used in the game. Greg remarks: "Queen: Play The Game presents a lot of imagery you may not have encountered before and in brand new puzzle formats. We submitted over 1,400 questions to Soshi, as well as a mass of imagery and they've presented the best of it in an inventive logical way — often in contexts you won't expect."

From launch, Queen: Play The Game spans across the history of the band, from the early days and the release of the first album, right up to "Made In Heaven" and the band members' solo projects. The app will grow as well, with new content and gameplay released on a regular basis, offering more ways to explore QUEEN and more ways to win cool official QUEEN prizes.