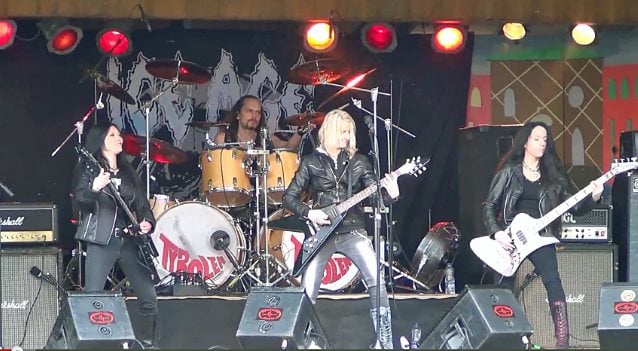 Video footage of the reactivated late 1980s Swedish thrash metal band ICE AGE performing on May 29 at at Muskelrock festival at Tyrolen in Blädinge, Sweden can be seen below.

ICE AGE in 2009 made its demo recordings — which were previously only available in cassette form — downloadable for free at www.ice-age.se. The group did this in order to combat the sales of a CD collection which was released without ICE AGE's permission.

ICE AGE is widely recognized as the only genuine female thrash metal band of the era, having taken its influences from early MEGADETH and METALLICA, among others.

Metal Forces' Bernard Doe championed the band in its early days in his magazine and the group had a brief tenure under the guidance of Hollywood music impresario Kim Fowley.

ICE AGE undertook three tours of Europe during 1988-1989 before acrimoniously splitting without ever releasing an album, despite reports that a contract had been signed with the AVM label and the band readied to record its debut.

ICE AGE's final lineup included American vocalist Debbie Gunn, who is better known for her stints as the lead singer in ZNOWHITE and SENTINEL BEAST. Gunn is featured in ICE AGE's video for the song "Instant Justice".