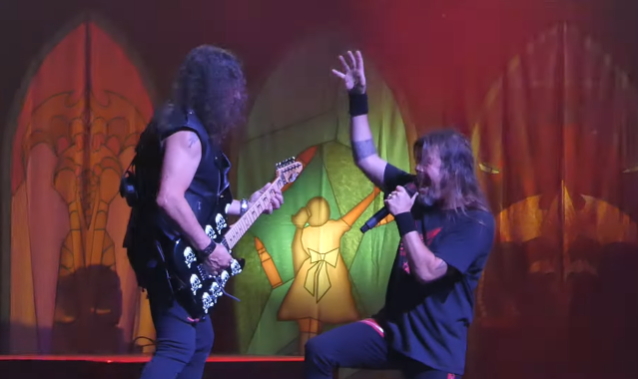 In a new interview with the "Heavy Demons" radio show, QUEENSRŸCHE guitarist Michael Wilton spoke about the band's decision to cover Billy Idol's "Rebel Yell" as a bonus track on QUEENSRŸCHE's latest album, "Digital Noise Alliance". He said (as transcribed by BLABBERMOUTH.NET): "With the record company, we have to have 10 or 11 songs [on an album]; that's what you're contracted for. And then they like extra songs, bonus tracks or whatever. So this time instead of giving a bonus track that's a live recording of one of our songs, we said, 'Let's do something different.' So we came up with the idea of doing a cover. Originally we were gonna do a CULT song, 'She Sells Sanctuary'. But Todd [La Torre, QUEENSRŸCHE frontman] didn't feel comfortable singing that. So he brought up the idea of doing the Billy Idol song. And it was really cool. We put a little spin of QUEENSRŸCHE in the song, but it's very reminiscent of the original. And Todd killed it on the vocals; it's awesome. So who knows? Maybe we might play that live; I don't know. But it's something that I think people are gonna be very surprised. They're gonna go, 'What?' They're gonna scratch their heads and then as they listen to it, they're gonna go, 'This is badass!'"

"Digital Noise Alliance" was released on October 7 via Century Media. The record was once again helmed by Chris "Zeuss" Harris, who previously worked with QUEENSRŸCHE on 2015's "Condition Hüman" and 2019's "The Verdict" LPs.

For the past five and a half years, drummer Casey Grillo has been filling in for QUEENSRŸCHE's original drummer Scott Rockenfield, who stepped away from the band's touring activities in early 2017 to spend time with his young son.

In October 2021, Rockenfield filed a lawsuit against the band's fellow original members Wilton and bassist Eddie Jackson, alleging, among other things, breach of contract, breach of fiduciary duty and wrongful discharge. A few months later, Wilton and Jackson filed a countersuit against Rockenfield, accusing him of abandoning his position as a member of the band and misappropriating the group's assets to his own personal benefit.

QUEENSRŸCHE kicked off its fall 2022 U.S. tour as the support act for JUDAS PRIEST on October 13 at Toyota Presents the Oakdale Theatre in Wallingford, Connecticut.