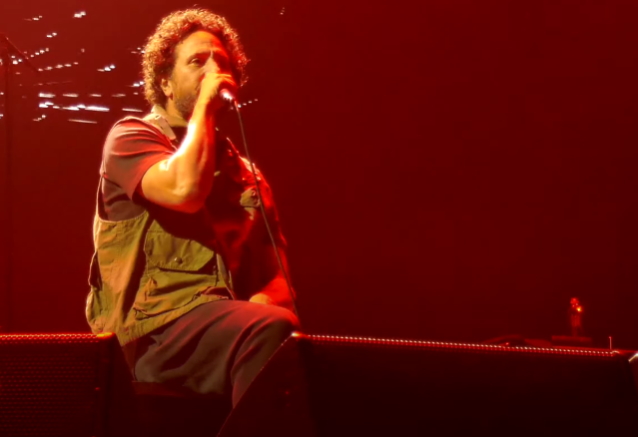 RAGE AGAINST THE MACHINE frontman Zack De La Rocha reportedly tore the anterior cruciate ligament (ACL) in his left knee during the band's July 11 concert in Chicago. The incident occurred during the fourth song of the second show on the group's long-delayed "Public Service Announcement" reunion tour. Ever since then, Zack has been performing while seated and the shows have gone off without a hitch, even though stagehands have had to carry the vocalist on and off the stage every night.

Although RAGE AGAINST THE MACHINE has not officially commented on the exact nature of De La Rocha's injury, acclaimed photographer Glen E. Friedman revealed on Friday (August 12) that a torn ACL is to blame for Zack's continued issues with standing on his left leg.

"I went to see my good friend Zack (with his torn ACL) perform last night at Madison Square Garden, one of the most hallowed venues in the modern world," Friedman wrote on Instagram. "RATM sold out FIVE nights. Even having to sit during the performance Zack De La Rocha showed the world what they had been missing in all the years he had been away from this incredible group of musicians. Zack 'brought it' like few other ever have or ever could. Integrity, and heart, the touchstones of the most important and greatest."

A full or partial tearing of the ACL is a very common knee injury in both athletic and normal populations. This injury typically occurs when an exterior force acts on the knee with the foot planted on the ground. A torn ACL typically causes symptoms of instability in the knee, along with knee pain and swelling. Sometimes the cartilage, kneecap, or other ligaments can be injured as well. ACL tears can be full, which means the tear extends through the entire ACL, or partial, extending only part-way through the ligament.

Earlier this week, RAGE AGAINST THE MACHINE canceled the August and September 2022 European leg of the band's tour to allow De La Rocha to recover from his injury.

RAGE AGAINST THE MACHINE is scheduled to complete its U.S. run on Sunday (August 14) at Madison Square Garden.

13 European shows were scrapped, including appearances at Britain's Reading and Leeds festivals.

De La Rocha injured his leg while he and his bandmates were performing "Bullet In The Head", a classic song from the group's 1992 self-titled debut album.

RAGE AGAINST THE MACHINE kicked off its long-delayed "Public Service Announcement" tour on July 9 in front of roughly 30,000 fans at Alpine Valley Music Theatre in East Troy, Wisconsin.