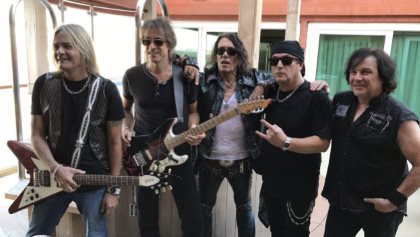 Hard rock radio personality and TV host Eddie Trunk, who is hosting Monsters Of Rock Cruise West, has posted several photos and videos of Pearcy, DeMartini, Croucier, Cavazo and DeGrasso performing at the event, along with a picture of the as-yet-unnamed new band's setlist, which, unsurprisingly, consisted entirely of classic RATT songs.

Drummer Bobby Blotzer has been touring the U.S. for the last year with his own version of RATT, featuring a rotating cast of musicians, including vocalist Josh Alan (ex-SIN CITY SINNERS).

Speculation about Pearcy, Croucier and DeMartini forming their own version of RATT to rival Blotzer's gained traction in August after they were photographed hanging out together at a Los Angeles birthday party. Bobby later dismissed the idea, telling Trunk in an interview: "Well, it's absurd. It ain't gonna happen. Warren can't do that. If Warren was to join up in that thing, he would be in competition with his own band and corporation — RATT, WBS… RATT. He would be kicked out on his rear end so quick… They'd have to call it something else; they couldn't call it anything but something else."

Two months ago, Pearcy told Canadian rock journalist Mitch Lafon that he was still friends with DeMartini and Croucier, adding that "Warren and I actually got together and wrote a song a while back, which is phenomenal… Who knows what will happen soon enough? We're just waiting for some dust to settle. I really can't say anything right now, but if the public has any positive message, it's being heard."

DeGrasso played several shows with RATT in 2014 as the temporary replacement for Blotzer, who was recovering from the neck surgery he underwent the previous year.

They have no name officially yet, but I'm sure open to suggestions... pic.twitter.com/agtn1dqrro

LIVE on #Periscope: Another of my favorites. Body Talk! https://t.co/aZdVeNXn1k

LIVE on #Periscope: Back For More. https://t.co/uSWBATtb7x

LIVE on #Periscope: Round & Round https://t.co/0cruvrJT5P