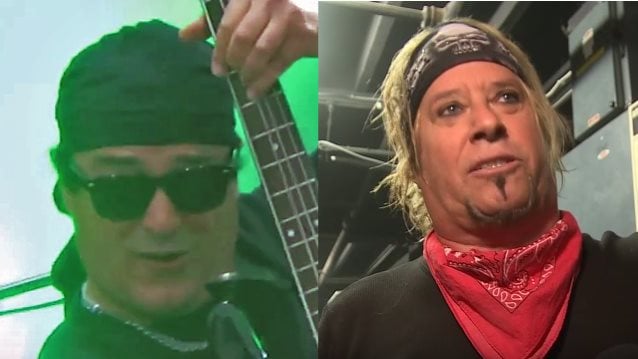 Juan Croucier has fired back at his former bandmate Bobby Blotzer, saying that the RATT drummer's comments about him were "inappropriate" and "low class."

Blotzer has been embroiled in a legal battle with Croucier and other members of the classic RATT lineup over the rights to the band's name.

Since 2015, Blotzer had been playing shows under the name RATT with a lineup in which he is the sole member from the band's '80s heyday. He has pitted himself against Croucier, founding singer Stephen Pearcy and guitarist Warren DeMartini, who reunited last October for a surprise performance on a Monsters Of Rock cruise. The trio has since played a series of RATT shows, including high-profile sets at Maryland's M3 Rock festival and Oklahoma's Rocklahoma, and has issued cease-and-desist letters to concert promoters in an attempt to block the Blotzer version of RATT from performing under that name.

Back in November, a California judge ruled against Blotzer with respect to whether Croucier had committed trademark infringement by using the RATT name and logo to advertise his band RATT'S JUAN CROUCIER in the fall of 2015.

After someone uploaded a short clip of RATT'S JUAN CROUCIER performing in February in San Antonio, Texas, Blotzer took to Facebook to share the video and disparage the bassist's stage presence, writing in a since-deleted post: "I would rather have surgery on my C**K with no anesthesia than to have to ever see this anywhere in my life again. Man, that's really disturbingly horrifying to see. A purgerer [sic] and a spazzorama freak! Seriously, can someone really say, 'Man, that was really great'? Looks like he's riding a broom horsey!"

Blotzer previously publicly insulted Croucier's appearance in January, comparing the bassist to "Danny DeVito with a headband on" while repeatedly referring to him as "Crucifer."

In a brand new interview with the "Music Mania" podcast, Croucier was asked about Blotzer's comments regarding his stage moves. He responded (hear audio below): "Honestly, I refuse to be kind of pulled down into that sort of mudslinging. Fans don't look at us for dirt and insults and deriding each other. I really wanna stay, and have been able to stay, above the fray. He wanted to make it personal, and I'm just not going there. What happened happened, things were adjudicated — it's not a secret; it's public record. I prevailed, and I'm very grateful for that. And I'm very happy for not only the members of RATT and us being able to continue on, but also for the fans — all the fans that really dig the band and really just wanna hear great rock music. And that's pretty much where I need to leave it. I can't address the things he said about me. It's just inappropriate and, frankly, it's low class."

During the same interview, Croucier said that "things are going terrific" with the current lineup of RATT, which also includes former QUIET RIOT guitarist Carlos Cavazo and drummer Jimmy DeGrasso. "The band's playing better than ever and [is] very, very consistent… It comes very natural."

He added: "I guess it's no secret that I'm heavily invested in RATT. It's always been a big part of my life. Even when I wasn't touring with the band, I was still there in spirit, if you will. So it feels really, really good; everybody's doing really, really well. We've really made an effort to pay attention to the quality of what we're doing. We've rehearsed quite a bit, and we really care. This is very important thing to us. So everybody's getting along great, the band is playing terrific. Things are really good, so I can't help but be happy."

Asked if there are any concrete plans for RATT to release the follow-up to 2010's "Infestation" in the not-too-distant future, Croucier said: "Right now, we're sort of getting our legs under us. Obviously, it's public knowledge, there's been some issues that we resolved. So moving forward, we intend on playing the rest of the year, up until probably… well, I'm not exactly sure exactly when. But we'll finish up this year playing shows, and then we're gonna be coming out right again next year and doing the same thing."

According to Croucier, while it's "inevitable" that RATT will at some point release more music, he is "not one that likes to promise things just because they sound good. I'm the kind of guy that, once we're in the studio and things are underway, we've got the songs, everything's moving right along, then I'd venture to say, 'Okay, yeah, we're gonna be releasing something,'" he explained. "But for the immediate future, it's full steam ahead for RATT. And right now we're just exercising our live muscle, if you will, and we're gonna keep on course and then eventually down the road, we'll regroup and figure out what's best for the group going forward. It's on a very positive level right now."

Croucier went on to say that "RATT right now is more harmonious and operating much more cooperatively than ever… We've been around a long time, and there's been a lot of ups and downs, a lot of changes, a lot of issues that have occurred, and at this juncture, everybody really kind of gets what the mission is. It's clearly defined and we just wanna accomplish it. So, moving forward, now we're at the point where I guess you can say that we're seasoned, which doesn't sit well with me, 'cause I still think I'm pretty young and I still feel great. But we're at that juncture now where, look, we know what's involved and we know what we need to do, an we really wanna make the best that we can for folks that come out to our shows and people that are into our music. So the process that we're in now, we're really trying to sort of do what we already know needs to be there, and then kind of just take it down the road."

The bassist also talked about RATT's '80s success and the reason the band failed to reach the same commercial heights as some of of their peers, such as BON JOVI, POISON and MÖTLEY CRÜE. He said: "A lot of this is luck of the draw. We worked really, really hard. There's one thing about RATT, and that's that we've always gotten the job done.

"I feel that RATT has always… We've been right there," he continued. "In a way, we didn't hit the mark that maybe we could have hit. But, you know, to look back on that and speculate and sort of hypothesize about it does a disservice moving forward. The one good thing about RATT is that we've always been a strong live band. And you have to sort of deal with the dynamics and the chemistry of the members within the band. Sometimes you'll have members that don't get along, people are feuding, you'll have differences, but all in all, through thick and thin, what we've managed to do is continue forward working. Yeah, there's been a period of time when there weren't records being released, record labels changed, a lot of things changed.

"Looking back, I'd be speculating if I said why RATT never got its just due, or why we never crossed a certain threshold," he added. "Yeah, maybe we could have released a couple of more ballads, maybe we could have done something a little more along the lines of radio strategy. But RATT's always sort of carved its own path, regardless of trends. We've always sort of said, jokingly, 'Only we can Ratt 'n' roll,' and in some ways we've been defiant. And that's sort of our sassiness, our sort of brattiness about us.