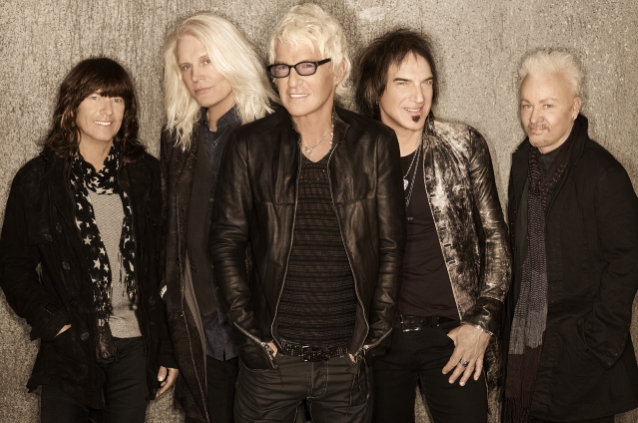 REO SPEEDWAGON has been forced to cancel two of its concerts this weekend after members of the band's "touring family" tested positive for the COVID-19 virus. The August 7 show at the The Festival at Sandpoint in Sandpoint, Idaho and the August 9 appearance at the 80th Sturgis motorcycle rally have both been called off as much of the country grapples with a resurgence of coronavirus cases.

"Unfortunately, while we have been practicing CDC and locally recommended COVID-19 protocols on tour, members of the REO touring family still tested positive recently," REO SPEEDWAGON said in a statement. "Fortunately, everyone was vaccinated, and all are feeling fine despite the positive tests. However, for the safety of our band, crew members, venue staff, our families, and our awesome fans, we will regrettably be canceling our upcoming show in Sturgis, SD. Once everyone affected observes the recommended quarantine and tests negative, we'll be back on the road again! Stay safe & get vaccinated everyone!"

Late last month, just a few days prior to the cancelation, REO SPEEDWAGON frontman Kevin Cronin told Ultimate Classic Rock that people were "just so excited to have live music back. It's been great for us so far," he said. "Hopefully, the rest of the country starts to wake up and get vaccinated so this virus doesn't take over and shut everything down again."

Formed in 1967, signed in 1971, and fronted by Cronin since 1972, REO SPEEDWAGON's unrelenting drive, as well as non-stop touring and recording jump-started the burgeoning rock movement in the Midwest. Platinum albums and radio staples soon followed, setting the stage for the release of the band's explosive "Hi Infidelity" in 1980, which contained the massive hit singles "Keep On Loving You" and "Take It On the Run". That landmark album spent 15 weeks in the No. 1 slot and has since earned the RIAA's coveted Diamond Award for surpassing sales of 10 million units in the United States.

Today, REO SPEEDWAGON has sold more than 40 million albums around the globe, and Cronin and bandmates Bruce Hall (bass),Neal Doughty (keyboards),Dave Amato (guitar),and Bryan Hitt (drums) are still electrifying audiences worldwide in concert with hits and fan favorites such as "In Your Letter", "Can't Fight This Feeling", "Time For Me To Fly", "Roll With The Changes", the aforementioned "Keep On Loving You" and "Take It On the Run", and many, many more.

Unfortunately, while we have been practicing CDC and locally recommended COVID-19 protocols...