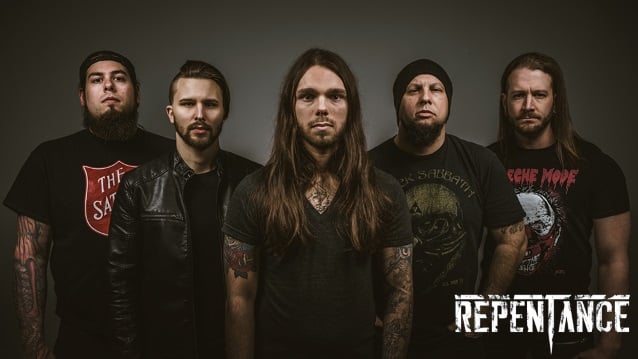 "Collide", the first song from REPENTANCE, the new band featuring former SOIL and DIRGE WITHIN guitarist Shaun Glass and STUCK MOJO frontman Robby J. Fonts, can be streamed below. The track was recorded at Mercenary Studios with Scott Creekmore (DIRGE WITHIN, LIONHEART, BROKEN HOPE) and mixed and mastered by Chris Collier (PRONG, LAST IN LINE, METAL CHURCH, FLOTSAM AND JETSAM)

For the past several months, REPENTANCE has been feverishly writing music at Chicago's Superior Street Studios, keeping a relatively low profile as the project took shape.

"REPENTANCE came together very naturally, which was a very cleansing experience," states Glass. "At this point in my life, I was hoping to start working and creating new music with an almost entirely new group of people, and this crew organically locked into place."

"It's crazy how things happen," comments Fonts. "I was looking to start a new band since Rich [Ward] and Frank [Fontsere] are currently busy outside of STUCK MOJO [touring with FOZZY], so the timing for REPENTANCE came perfectly. It was NONPOINT's drummer, Robb Rivera, that introduced me to Shaun. One phone call later, we were stoked to get this show on the road. Shaun sent me demos, I wrote lyrics and vocals and our songs started coming together quickly."

"The band's sound is definitely very aggressive, pummeling metal and we can't wait to share some music with everyone soon," adds Glass. "Everyone is bringing their own style to the table, and the uniqueness of each is helping to shape our sound. All that said, we're all on the same page in terms of the musical direction that we're headed. 'Don't play metal if you ain't metal!' We're creating a style that we enjoy ourselves first and foremost."

"You know you're on to something special when everyone connects instantly and the creativity keeps on flowing," says Fonts. "I think fans of our previous work will be in for a pleasant surprise… this band's sound is HEAVY. Get ready for REPENTANCE!"

REPENTANCE will make its live debut on May 23 at The Forge in Joliet, Illinois as the support act for TRIVIUM and TOOTHGRINDER.