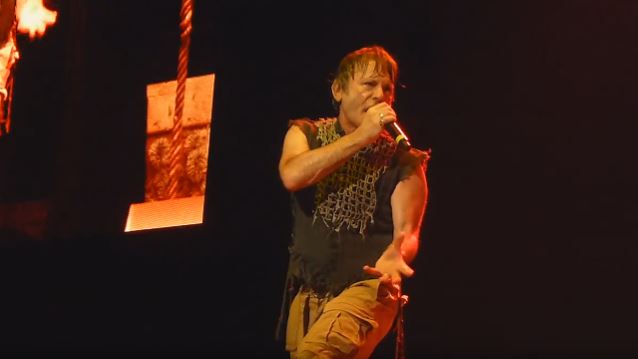 Considering the overabundance of recent rock casualties, it's no small miracle that IRON MAIDEN's Bruce Dickinson was able to artfully dodge the reaper's scythe during his recent cancer scare. Still, as many of their arena rock peers have recently embarked on farewell tours (MÖTLEY CRÜE, BLACK SABBATH),hinted at retirement (RUSH) or displayed troubling signs of wear and tear (DEF LEPPARD),and when the best selling point for others is that you're not sure you'll get another chance to experience them live (AC/DC, SCORPIONS),it's impossible to ignore the sense of mortality — or at the very least, the lack of invincibility — that accompanies Ed Force One into South Florida for the kickoff of MAIDEN's world tour in support of "The Book Of Souls".

Nonetheless, there's palpable excitement in the air at the BB&T Center in suburban Fort Lauderdale — the home of the National Hockey League's Florida Panthers — as the band commences another lap around the globe. Some of that feeling can be credited to natural curiosity regarding the tour's opening night: What will — and won't — they play? (See below for the full scoop.) How will the stage look? (Think Indiana Jones meets Mayan-chic.) When will Eddie appear? (The answer lies in "The Book.") Does Janick still prance around ridiculously? (Surprisingly, not so much — at least, not until "The Red And The Black".)

The biggest question mark going into tonight, however, is Dickinson — but if there were concerns about the extent to which chemotherapy would silence the Air Raid Siren, they were quashed by tonight's one-hour, forty-five-minute set. Other than two timing miscues, Dickinson sounded in fine form throughout the band's fifteen-song performance, his vocals carrying "Children Of The Damned" (performed tonight for the first time in seven years) and his powerful scream providing a rousing exclamation point to "The Number Of The Beast".

Unlike practically every other veteran recording artist, IRON MAIDEN relishes the opportunity to play new material in concert rather than coasting by on the coattails of their greatest hits. A quick glance back at respective opening night set lists for tours in support of the band's last four albums showed that they played six new songs each from "Brave New World" and "Dance Of Death", five from "The Final Frontier", and, of course, the entire ten-track "A Matter Of Life And Death". Accordingly, it seemed fair going into tonight to expect the group to air about half of its new ninety-two-minute double-album.

If you took the over, collect your winnings now, as a grand total of six of the eleven songs on "The Book Of Souls" end up making their live debuts here. While the record, if bloated, is far better than any act's sixteenth studio album has a right to be, does it really need to be showcased on stage in such depth? Some might say it's unfair to criticize a band for what they don't play, but when you have a catalog whose depth and power is unrivaled, it's hard to justify the continued extent to which MAIDEN spotlights new material. Perhaps in some parallel universe, there are 15,000 fans who would rather hear "Death Or Glory" or "Tears Of A Clown" instead of, say, the unaired "2 Minutes To Midnight" or "The Evil That Men Do", but that's not the case here tonight — which is why, after the band opens its set with four out of five new songs, enthusiastic cheers greet the comfort-food riff of "The Trooper". The track provides an instant jolt of adrenaline, as does the powerful visual of a Redcoat-clad Dickinson waving a battle-scarred Union Jack.

The band keeps the energy level high with "Powerslave" before detouring back toward "The Book Of Souls", the title track's lumbering riff providing guitarist Janick Gers another opportunity to prance around stage left. Of the other new songs performed tonight, the most effective are "If Eternity Should Fail" — a serviceable, if predictable, set opener featuring columns of fire — and "Speed Of Light", which features a cool solo trade-off by guitarists Adrian Smith and Dave Murray, as well as the first of dozens of "Scream for me, Fort Lauderdale!" battle cries. As for the eleven-minute "The Red And The Black", it will undoubtedly go over great in South America. South Florida? Not so much. Still, the rapid-fire vocal phrasing in the verses demonstrate Dickinson's vocal stamina, although he wisely ducks out for the song's meandering five-minute prog-metal jam section that serves as tonight's best opportunity to snag a $14 Trooper beer.

The home stretch provides a master class in epic and dramatic heavy metal, with "Hallowed Be Thy Name" — during which Dickinson sports a hangman's noose — followed by the chilling "Fear Of The Dark". There's not much that can be said about the latter that hasn't already been written at some point over the last two dozen years, but in the midst of a cheering (and "whoa"-ing) crowd, the song provides as pure a moment of escapist joy that a certain writer can recall experiencing in concert. Transcendent.

From there, Dickinson stumbles a bit during "Iron Maiden", singing a few lines ahead of the beat. To his credit, he proceeds to own the mistake and pokes fun at himself, telling the crowd that the band is once again "all on the same page" before Eddie makes his second appearance of the night. (Spoiler alert: He grew up quickly over the span of three songs.)

After an inflatable Beelzebub hovers during a pyro-drenched "The Number Of The Beast", the band's three-song encore continues with "Blood Brothers", a surprise inclusion from "Brave New World". ("We've got a lot of songs to pick from," Dickinson acknowledges.) He opens with a heartfelt speech about "the MAIDEN community," saying that "it doesn't matter what religion, what sex, what color you are... we're all blood brothers."

For their finale, the band delivers a knockout punch via the irresistible "Wasted Years". Intentionally or not, the song drives home the point once more that we don't have all the time in the world, and that our remaining heroes aren't getting any younger. In that spirit, here's hoping MAIDEN's book still has many chapters yet to be written.