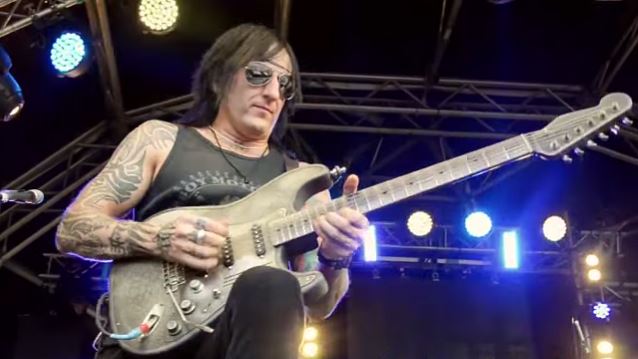 RICHARD FORTUS On New GUNS N' ROSES Album: AXL ROSE 'Wants To Create Stuff And Release It When It's Ready'

GUNS N' ROSES guitarist Richard Fortus took part in a workshop on November 20 in Sydney, Australia. You can watch video footage of the event in three parts below. A couple of excerpts follow (transcribed by BLABBERMOUTH.NET).

On how much he contributed to the writing process for 2008's "Chinese Democracy":

Fortus: "On 'Chinese Democracy', I was adding to ideas that were already there. That entire record was written when I joined the band 13 years ago. Except I wrote the chorus to 'Better'. A lot of the new stuff [that ended up on that album] that [we were] working on, some of that stuff [are ideas that came] from nothing and some of the stuff is stuff that [we had] been working on that were ideas that were already there. Some of the stuff Slash did that was the beginning of the seed of the song that's been around for a while."

On the progress of the songwriting sessions for the follow-up to "Chinese Democracy":

"That camp is very… I don't know why. It's just that they're very… Axl is very secretive. He doesn't want stuff getting out. He wants to create stuff and then release it when it's ready. Which I… I get it. He's also a bit of a perfectionist, as you can imagine.

"The way [Axl] generally works is that he doesn't wanna take an idea that DJ sent and… What he'll do is he'll take a little piece that I sent, he'll take a little piece that DJ sent on another track, and he's always done that. Back even with the 'Appetite [For Destruction]' stuff, he would take a little bit from this, a little bit from that, and then put it together. And when you listen to it, you can sort of hear it. When you listen to the tracks, you can hear that it's… Especially on 'Illusions' [the 'Use Your Illusion' albums], the opuses, [where] he took little bits from different people and put them together. He's got a real talent for that."

Ashba said in a recent chat with Legendary Rock Interviews that GUNS N' ROSES has both recording and touring plans in 2015. He revealed, "We are planning on doing quite a bit of touring this coming year. The focus is getting in a studio and putting together what we all feel is the best GUNS N' ROSES record. Lack of material is not an issue. We have tons of stuff."

Ashba added. "Axl has two full albums that he has recorded. He has played me a bunch of songs off of that that are incredible! I can't wait to get in and kind of dive into those as well. I've written tons of songs and demoed up a bunch of stuff. I think it is just a matter of getting in and sifting through the piles of material."

Reed told The Pulse Of Radio that there is both older and newer material lurking around. "We've all been at it," he said. "We've all been, you know, handing files back and forth to one another in various combinations of different people, but also there is quite a bit of material that still needs to be finished and needs to be released. And so one or both of those things is gonna happen."