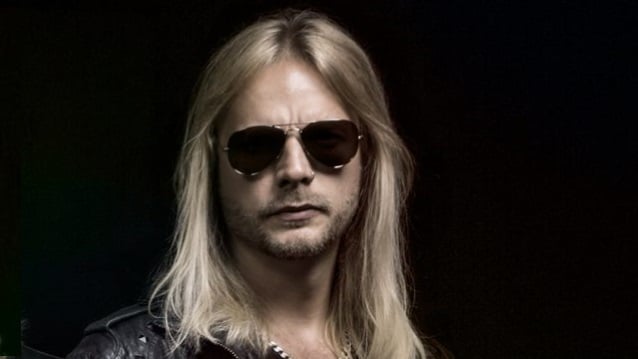 RICHIE FAULKNER: If JUDAS PRIEST Is Not Inducted Into The ROCK AND ROLL HALL OF FAME, What Is The Credibility Of It?

Richie Faulkner says that the credibility of the Rock And Roll Hall Of Fame should be questioned if JUDAS PRIEST doesn't eventually get the honor of being inducted.

Faulkner told The Vindicator that he would like to see PRIEST get its rightful place in the Hall — even if just for the sake of its fans.

"I don't speak for the rest of the band," the guitarist said. "This is my own opinion. But [induction into the Rock Hall] means a lot for some fans. Metal has always been the underdog. For a band like PRIEST to be nominated is great for metal and its fans, and it's great to see those fans being appreciated. On the other hand, I think after 50 years of creating new music and touring the world, with our fan base, that's more of an accolade than any award. Our fans are passionate.

"We could get in next year," Faulkner continued. "If PRIEST is not inducted, what is the credibility of it?"

In a separate interview with the Long Island Pulse, Faulkner admitted that he has "split views" on PRIEST's potential induction into the Rock Hall. "First of all, I am not eligible to be included in the Hall Of Fame; you have to have a 25-year history," he said. [Editor's note: Richie joined PRIEST in 2011]

PRIEST singer Rob Halford recently said that he "would love" to see his band inducted into the Rock Hall. "I think we deserve it," he said. "We've put our 10,000 hours in and more. And beyond that, we just feel that heavy metal music deserves more space on the shelf at the Rock And Roll Hall Of Fame."

Adding that he and his bandmates "were thrilled and honored to be even nominated," Halford admitted that it's "kind of bittersweet" to find out that they wouldn't be inducted this year. "We got the nomination, which is something of a recognition for the work that you've done, but we didn't quite get in this time. But I'm hopeful that eventually we'll get some more metal [in there]."