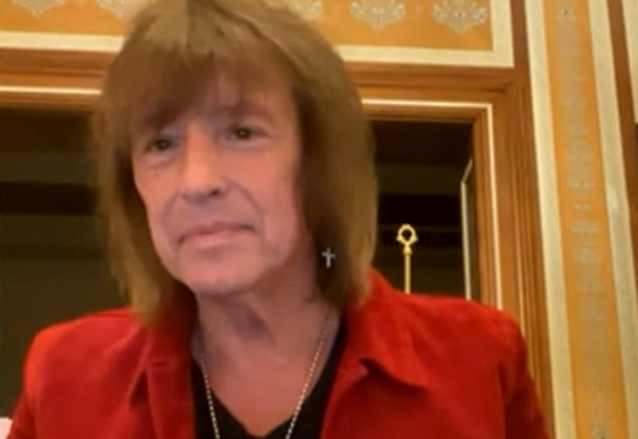 RICHIE SAMBORA: 'I Have A New Record That's Ready To Go'

During an appearance on the red carpet at the Nordoff Robbins O2 Silver Clef Awards at the Grosvenor House Hotel in London, England on July 1, former BON JOVI guitarist Richie Sambora revealed that he has been working on new music in the last couple of years. "I have a new record that's ready to go and I've been kind of holding it through the pandemic," he told Red Carpet News TV (as transcribed by BLABBERMOUTH.NET). "And I'd say in the fall we're gonna put it out."

Asked if it was difficult not being able to perform music during the pandemic, Richie said: "It was interesting for me because it was probably one of the first times there I had a chance to — forcibly — slow it down. So what that did for me is I just practiced a lot and wrote every day, wrote songs and just kind of sharpened the pencil. And I played a lot of piano too. So it was actually a decent time for me because it slowed me down on purpose."

Regarding what fans can expect from his new music, Sambora said: "I'm very proud of it. I don't write bad songs anymore; I just don't; it just doesn't happen. And the people I work with would be, like, 'That's bollocks.' But it's not hard for me. I'm just lucky that way. And plus, I just write all the time, so it's like a daily exercise for me. I try to come up with something every day. It's like having a journal. It's like keeping a journal of your thoughts, keeping a journal of what's going on in your life, how you're feeling."

Sambora left BON JOVI in 2013, saying that he wanted to spend more time with his daughter Ava, now 24.

Richie, who joined BON JOVI in 1983 and co-wrote most of the group's iconic hits over the following three decades, hasn't performed a full show with the band since he left the "Because We Can" tour seven years ago.

Sambora and guitarist Orianthi, as RSO, released the album "Radio Free America" in May of 2018.