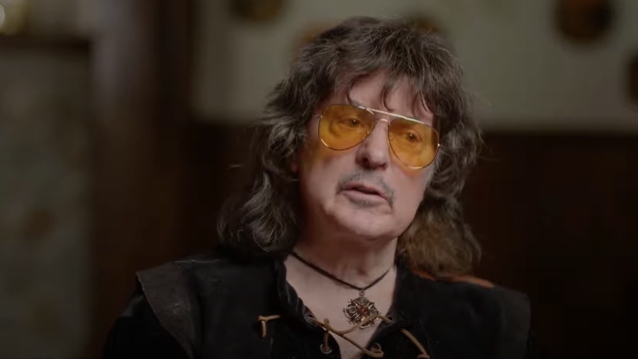 In a new interview with Long Island Weekly, DEEP PURPLE and RAINBOW legend Ritchie Blackmore spoke about his reliance on non-traditional instruments with his medieval and Renaissance band BLACKMORE'S NIGHT, in which he is joined by his wife, singer Candice Night.

"I'm not really interested in the modern approach with modern instruments,” he admitted. "We use synthesizers on certain things, but they are there to see how we're going to progress with the other instruments. It's all about going back to the basics — simple music.

"Melody is very important to me," he explained. "It's an important thing. That's why, even in DEEP PURPLE, towards the end, before I left, our music was a bit monophonic. There wasn't too much melody and if I don't hear a melody, I can't be inspired. I find that with a lot of hard rock bands today — not the death metal or whatever — the melody is certainly not there and I can't relate to that."

During his time away from PURPLE, Blackmore established the neo-classical band called RAINBOW, which fused baroque music influences elements with hard rock before gradually progressing to catchy pop-style hard rock.

A year ago, DEEP PURPLE drummer Ian Paice told Darren Paltrowitz, host of the "Paltrocast With Darren Paltrowitz", that "the only time" he and his bandmates "got concerned" about the group's future "was towards the end of Ritchie's tenure with the band, as he was losing interest and the performances from the band were not great because you need everybody helping each other out; you can't be a passenger. And we just saw the audiences getting smaller and less impressed, and that was worrying," he admitted. "And when Ritchie decided to leave, that was pretty traumatic, because [we didn't] know what to do then. And had we not been contracted to have to go to Japan, it might all have fallen to bits then. But we had to go to Japan, with the wonderful Joe Satriani [filling in], and it proved that there is life after even somebody as great as Ritchie is. He didn't wanna be there, but it was just as much our band as it was his. And we were still having fun. We started to have fun again when Joe turned up and just became a fifth member of the band, pulling his weight. So that was the light at the end of the tunnel."

Paice's comments echo those made by DEEP PURPLE bassist Roger Glover, who told U.K.'s Planet Rock in a September 2020 interview that it was a "turbulent time" for him and his bandmates when Blackmore left the group for the final time in November 1993 after a concert in Finland. "It was surprise to me when Ritchie handed in his notice and said he didn't wanna play any more gigs after Helsinki," he said. "And we were on tour at the time. It was so difficult to take in. Somehow we were determined to carry on, if he was gonna do that. Joe Satriani was a temporary replacement, which did show us the way that we could exist without Ritchie. But I felt very strongly that you can't replace Ritchie. He is who he is, and there's no way you can replace him."

He continued: "If you get someone to play like him or similar or something like that, it would have been a horrible comparison. We needed something different. And to me, the character of PURPLE always was Ritchie and Jon [Lord, late PURPLE keyboardist] as instrumentalists, and they're both virtuosos. So you've gotta have a virtuoso. There's thousands of guitarists who can play, but there's very few who stand out as being very individual and different to everyone else. And I felt Steve [Morse, longtime PURPLE guitarist] presented that. He asked me when we first met, he said, 'What do you want from me?' I said, 'I want you to be yourself. You can't be in the band unless you're yourself, a hundred percent.' And he said, 'So I can play anything?' I said, 'Yeah. Anything will do. We'll let you know if we want it or not.'"

According to Glover, the lineup change had an immediate effect on the band morale.

"'Purpendicular' was one of the happiest albums I've ever made, because suddenly we found ourselves writing songs we could never have written before," Roger said, referring to DEEP PURPLE's first LP with Morse.

Blackmore stepped away from his Renaissance-inspired brand of music with BLACKMORE'S NIGHT in 2016 to perform a handful of shows with a brand-new lineup of RAINBOW.