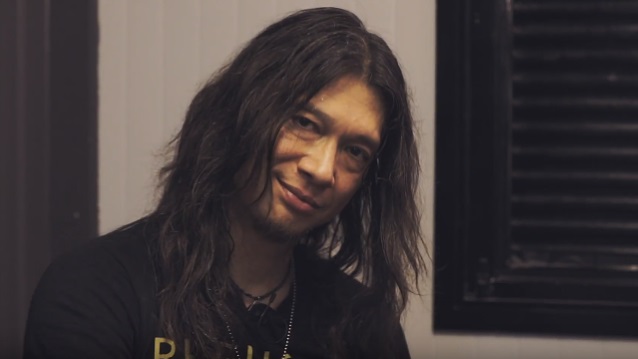 DEATH ANGEL guitarist Rob Cavestany says the band's 1990 tour bus accident in Arizona "ended our band right there." The crash, which occurred while DEATH ANGEL was touring in support of their major label debut, "Act III", had the biggest effect on then-drummer Andy Galeon, who was seriously hurt with a head injury and other damages that would require reconstructive surgery. DEATH ANGEL would break up a year later, with four of its members (minus vocalist Mark Osegueda) forming THE ORGANIZATION.

In a recent interview with Sebastiano Mereu of From Hero To Zero (see video below),Cavestany was asked to weigh the differences between being a professional musician today versus when DEATH ANGEL got their start in the mid-'80s. "Definitely the game has changed incredibly," Rob said. "I think in the very beginning, at least from my point and from our band's point of view, there was nothing to do with the business. We didn't even know about that. We weren't even seeing that whatsoever; all we wanted to do was play music and have a great time and participate, and participate in the action and the fun from when we were seeing concerts and listening to music. We just wanted in on that. We knew we wanted to form a band before we even knew how to play our instruments. We learned how to play so we could have a band together. We practically were writing songs before we were even trying to cover songs because we wanted to have original music and make our records and do our thing. We were really driven by the excitement and the love of music, like anybody should be. So, that was like us over the first, practically, our first three albums, our first eight years of our existence, plus, we were really young back then and naïve and we didn't know anything about anything except trying to have fun, which is a beautiful state of mind to be in. But, you can never go back."

DEATH ANGEL's profile rose considerably throughout the late '80s on the back of thrash classics such as their 1987 "The Ultra-Violence" debut and 1988 successor "Frolic Through The Park", both released on Enigma. Younger than many of their fellow thrashers, DEATH ANGEL gradually started to draw interest from major labels, many of whom had started to pluck thrash bands from independent record companies in hopes of recreating the success of larger acts such as METALLICA and MEGADETH.

"As time transpired and things got more serious, our band was getting bigger, we got signed to a major record deal with Geffen Records, got major management happening, booking agents and all of this stuff…the business part was getting very obvious to us," Rob said. "Then, we started to not like it so much because it was taking away that fun and that innocence and the whole idea of what we were playing music for, to be rebellious and just have this anti-establishment kind of mentality, right? But, you're kind of forced to realize the reality of it, too. And we're also growing up, it's probably really confusing. At this point, we're 20, 21 years old and all these years, we've been touring and, in the studio, and doing our own thing, but also getting manipulated simultaneously by management and record labels and things and not realizing what was happening. All of the sudden at once, we got a bit disillusioned there and we didn't like it. We got really sick of the whole business side of things, which started creeping into the music side of things because it's hand-in-hand."

Geffen assigned prominent British producer Max Norman to work on the band's third album, 1990's "Act III". A more mature and melodic effort than its predecessors, "Act III" was released at the tail end of the thrash metal boon, with DEATH ANGEL — like many of their contemporaries — getting caught in the crosshairs of the emerging grunge scene.

"Music was even evolving out of the '80s and into the '90s, the style of music we were playing was evolving, evolving and disappearing," Rob said. "Right at that point in time, due to circumstances beyond our control, our band came to an abrupt end. We were on tour, we had this terrible bus accident. Because of that, we were basically screwed. It ended our band right there. There's serious injuries happening, our drummer, Andy, was injured really bad and stuff. It was a real shock to us. That was the beginning of the end, right there. At that point, by the time we were regrouping after that was happening, we didn't want any part of that anymore, not to mention Geffen dropped us from the record label because we wouldn't immediately replace our drummer and continue touring right away, which in retrospect, I can see their point of view about it. They invested a lot in us and they wanted us to keep promoting the album, but we just didn't have the heart for that. We weren't going to replace Andy and move on like that. We were a tight unit and were family and we just said 'No way.' Then we really saw the ugly side of the music industry. It was like, 'Oh, it's like that. Bam.'"

Cavestany went onto to detail the period of time when DEATH ANGEL was inactive but its core members still playing together, most notably in THE ORGANIZATION, a decidedly less thrash-oriented outfit. With thrash at its all-time low and disillusioned by the music industry, Cavestany said he wanted to play music for the sheer joy of it and cast all business matters to the side.

"There was this period of about 11 years until we reunited where we just separated and did all of these different musical projects with different people," he said. "Sometimes some of us together, sometimes not and exploring just other musical avenues and getting a lot of other things out of our system and we were just kind of like, had a bad taste in our mouth for metal and thrash at that point, which was, I guess, fine, because that music didn't really exist anymore at that point. It was weird. I didn't understand where metal was going. I wasn't getting it, the different styles that were fusing into it. I just kind of turned my back on it and started listening to other music and exploring other kinds of sounds, which was great because there's a lot of great music out there.

"Then, throughout that time, also, we were seeing how the music industry was, personally, I didn't want any part of it. I wasn't really trying really aggressively to pursue music at that level as what DEATH ANGEL was doing before that. I wanted to try to recapture that time of enjoying music and playing local shows and jamming with friends and not really trying to play the 'game' of the music industry, just playing shows. As a consequence, we were getting nowhere. At the same time, your band wasn't elevating because you weren't pushing the business side of things. At the same time, I didn't really care that much at that point in time. So, it was a good space of time to escape that whole thing and rediscover music."

DEATH ANGEL would reunite in 2001 as part of the "Thrash Of The Titans" benefit show for TESTAMENT vocalist Chuck Billy and DEATH leader Chuck Schuldiner's cancer treatments. Surprised by the response, it spurred DEATH ANGEL to reform on a full-time basis.

"At that point, we again, we were trying to take that innocent approach again where we weren't trying to do anything," Rob said. "We were playing together; we weren't even intending to last very long. We just thought we would do a tour or something, like a reunion tour and leave it at that. We started writing music little by little, just naturally, then Nuclear Blast came along and started to tell us, 'Let's do it. Come alive again and make music.' Little by little, we got the idea we should jump back in. So, we signed to Nuclear Blast, and there began this era of the band, or at least the next era of the band."

DEATH ANGEL's latest studio album, "The Evil Divide", was released in May 2016 via Nuclear Blast. The CD was recorded at AudioHammer studios in Sanford, Florida with producer Jason Suecof, who previously worked on 2010's "Relentless Retribution" and 2013's "The Dream Calls For Blood".