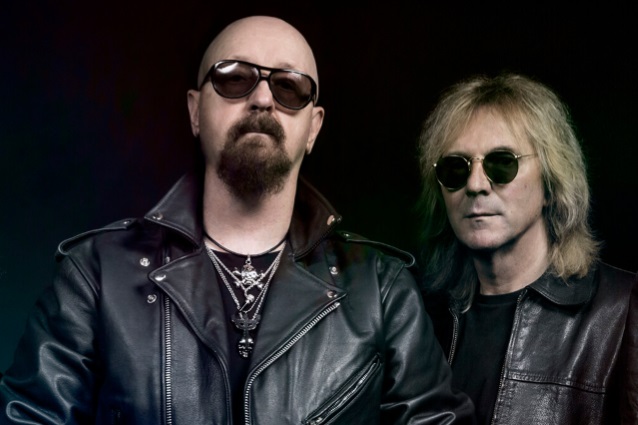 JUDAS PRIEST frontman Rob Halford says Glenn Tipton rejected the idea of performing live with backing tapes or an additional guitarist offstage to assist him during his battle with Parkinson's disease. The axeman was diagnosed with the disease 10 years ago, but recently announced he was going to sit out touring activities in support of PRIEST's new studio album, "Firepower". Tipton, who is now 70 and has performed on every PRIEST album since the band's 1974 debut set, "Rocka Rolla", is not quitting the band, but simply cannot handle the rigorous challenges of performing live. He has been replaced on tour by "Firepower" producer Andy Sneap, also known for his work in NWOBHM revivalists HELL and cult thrash outfit SABBAT.

In a recent interview with veteran Japanese rock journalist Masa Itoh (audio below),Halford was asked to describe Tipton's battle with Parkinson's and how it has affected his role in PRIEST. "Well, Glenn has been fighting a very courageous battle with Parkinson's for ten years," Rob said. "He began to feel the symptoms of Parkinson's ten years ago. Parkinson's is a degenerative condition, it's making him very uncertain about being able to play at the level of his guitarmanship. Glenn's style is very special and unique in metal and once he felt that Parkinson's was not making him able to achieve that level, just recently, only a few days ago, he made the decision that it was not possible for him to play on the 'Firepower' tour. But, as we said in the statement, Glenn is able to still play guitar. He's able to play the simpler, easier JUDAS PRIEST songs, but the songs that are more challenging, 'Painkiller', 'Freewheel Burning', 'Exciter', these are too much, too much. So, Glenn will be coming out when he feels ready to join PRIEST. Just to make an appearance, maybe one song, two songs, three songs, anywhere in the world. It could be in the U.K., it could be Japan, could be America, could be anywhere. So, it's been a very difficult, emotional journey for Glenn and for everybody in JUDAS PRIEST. But, now we feel some peace and some balance and some harmony because Glenn has made the best decision for his life, as a musician, to be able to continue. Right now, he's thinking of new ideas for the next JUDAS PRIEST album. He can still write songs. He can still play the basic arrangement of a new PRIEST song and that's the exciting, positive hope of the future for Glenn and for JUDAS PRIEST."

Halford was asked when it became more evident that Tipton was struggling with Parkinson's and went on to explain how Tipton dealt with the disease in recent years, including a warm-up routine that enabled him to continue to perform live with PRIEST. "I think everybody noticed around the time of the 'Redeemer Of Souls' tour," Rob said. "It was becoming very obvious that from a day-to-day performance, Glenn was finding it more challenging to be consistent. So, he would go to the venue hours and hours and hours before the show to practice, practice, practice, practice. That shows his professionalism. So, he would practice, practice, practice to the point where he was able to confidently walk out and play a show. But, I think we all think we all felt there was some serious issues beginning to show through the 'Redeemer Of Souls' tour. And it's a miracle he was able to play every show because he would say, 'Today, I don't feel good, but I'll make the show happen.' And he was able to do that. So, this is the progression of Parkinson's. It's very inconsistent. Some people only show the symptoms for a short period of time and then it disappears and then it comes back. Or, some people have the symptoms and they progress very rapidly and your ability with the hands becomes difficult in a very short period of time. Glenn has been having the best medical treatment for 10 years and has been able through his brilliant doctor's teams to get him through the last ten years, which is a long time. He said when he first told us 10 years ago, 'I don't know how long I've got. It could be a year. It could be two years. I don't know.' So, it's a blessing and a miracle that we've been able to enjoy Glenn's work for a whole decade until just a few days ago."

After it became evident Tipton was not going to be at 100 percent, Halford said PRIEST started making suggestions to the guitarist on how he could still participate in the "Firepower" touring cycle. Ideas included using an additional guitarist backstage to cover for some of Tipton's parts or using backing tapes, both of which were rejected.

"We were making rehearsals just recently," said Rob. "We could see he was having tremendous difficulty and we wondered, 'Will we be able to tour? Is there a way to make him able to tour with some kind of support with another guitar or backup tapes or something like that?' And we had initially suggested that to Glenn. But Glenn is a purist in performance and his feeling was that he didn't want to have anything assisting him while he was playing live. So, as a result of that, when he made this decision, he made the decision and said, 'I want to do what's the best for the band. Not what's the best for me.' He was always thinking about the band, not thinking about himself: 'I don't want to go on tour with PRIEST because I'm going to compromise the band's performance.' It's such a very selfless, beautiful expression of the 'Show must go on, the band must continue.' So, we said 'Glenn, it's not about the band for us. It's about you. We want you to find the peace and harmony in the decision that you make.' But, he kept saying, 'No, no, no. It's got to be for the band, the best thing for the band is if I step away from some touring and we find a friend, find someone to stand in my place for me.' So, that was just a remarkable display of emotion."

Halford then went onto detail him witnessing Tipton's struggles with Parkinson's first-hand and reiterated once again that Tipton played his own parts on "Firepower". "[It was] very, very difficult," said Rob. "I would watch him work and sometimes he was only able to make a few minutes or a few seconds. We would capture that and through metal magic, make all the pieces connect. What you hear on 'Firepower' is Glenn. It's all Glenn. His performance is real. But he would never give in. He would never stop. He would never say, 'I can't do it.' He would always go into the studio every day with the belief that, 'Okay, I have to do the lead break for this song. Have to do the rhythm tracks for this song.' As difficult as it was for him to make these recordings, he was able to do it because that's his personality, that's his character. He has so much strength and determination that it was just an incredible display of bravery."