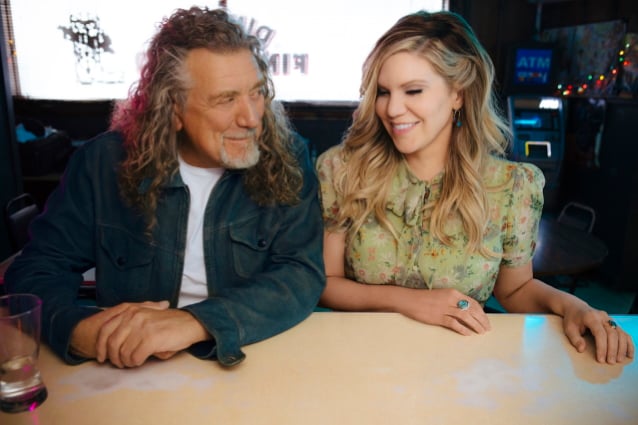 Robert Plant and Alison Krauss have released the official lyric video for the song "Can't Let Go", from their first new album in fourteen years. Out November 19 on Rounder Records, "Raise The Roof" has been named one of the most anticipated LPs of the fall by the New York Times, New York magazine, Entertainment Weekly and more. Like its platinum-selling 2007 predecessor, "Raising Sand" — which won six Grammys, including "Album" and "Record Of The Year" — "Raise The Roof" delivers new takes on songs from legends and unsung heroes of folk, blues, country and soul music.

"Can't Let Go" is a rendition of the Randy Weeks/Lucinda Williams classic that reaffirmed Rock And Roll Hall Of Famer Plant and 27-time Grammy winner Krauss as "one of the most critically adored odd couples of music" (USA Today). As NPR Music says: "This feels like a warm welcome back from two old friends you haven't seen in a long time," and across "Raise The Roof", their voices "still fit together like a pair of dusty boots nestled atop a welcome mat" (New York Times).

"High And Lonesome" is the collection's lone original, written by Plant and T Bone Burnett, who reprises his "Raising Sand" role as the album's producer.

Recorded at Nashville's Sound Emporium Studios, sessions for "Raise The Roof" began in late 2019 and wrapped just weeks before the world went into lockdown.

"One of my favorite parts of this is the songs and songwriters that I had never heard of," says Krauss. "Working with Robert, and with T Bone, is always a great education in music history."

The rest of "Raise The Roof" includes deep cuts by Merle Haggard, Allen Toussaint, THE EVERLY BROTHERS, Anne Briggs, Geeshie Wiley, Bert Jansch, Calexico and more. "It's such a far cry from everything I've done before," says Plant. "I love the whole kaleidoscope of music that I've explored, but this is a place where you can think within the song, you can decide how to bring home an emotion. It's another blend that we've got, and long may we have more of them."