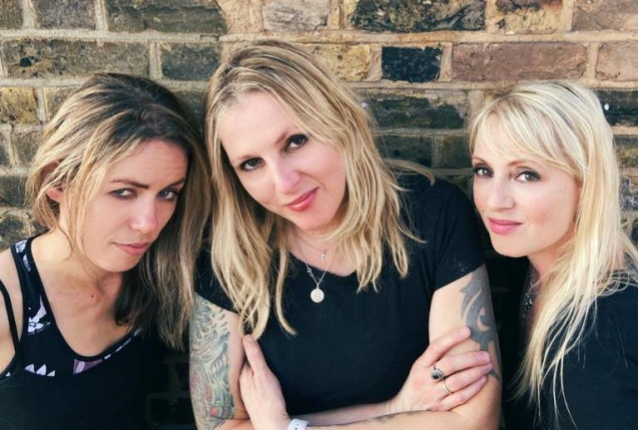 ROCK GODDESS — the reformed female power trio from the days of NWOBHM (New Wave Of British Heavy Metal) — has announced its "retirement" from live performances.

Earlier today (Friday, August 19), ROCK GODDESS released the following statement via social media: "With a very sad, heavy heart we have to announce we can't continue in the present form of ROCK GODDESS.

"In this modern world our journey has been a little bit harder. Logistical and financial obstacles playing a big part. After the latest bout of bad luck getting covid in the camp, just before the major festival Barcelona RockFest, it was the straw that broke the camel's back. So sadly we announce our retirement on the live circuit effective immediately.

"We love our fans and appreciate everything you have done. Thank you to our Manager Richard Thompson, and his belief, dedication, and hard work. To our agent Martin Jarvis for his faith and understanding. To our father who started and managed ROCK GODDESS, without whom none of this would have been possible. To our family and friends who helped along the way since our reformation. And TO THE FANS who have supported through thick and thin. Thank you. Really. THANK YOU! Without you, this would not have been the amazing, wonderful experience that it has been. To each and every one of you, we love you and are eternally grateful.

"We have a boxset of unreleased material and live work waiting on Universal approving (it's been many months …). But we hope you will be interested. We hope it comes to fruition as there are some surprises on there!

ROCK GODDESS's comeback album, "This Time", was released in 2019. The effort, which was made available via the band's own label, Bite You To Death Records, in conjunction with partners worldwide and digitally via Cargo Records, was recorded in 2018 at a London studio with producer Wes Maebe (UB40, Robert Plant, NEW MODEL ARMY, PRAYING MANTIS).

In 2018, ROCK GODDESS parted ways with bassist Tracey Lamb and replaced her with Jenny Lane.

Prior to the arrival of "This Time", ROCK GODDESS's last release had been a three-song EP, "It's More Than Rock And Roll", which came out in May 2017.

ROCK GODDESS briefly reformed in 2009 and was due to play Hard Rock Hell festival in Prestatyn, and was also booked to perform at the Headbangers Open Air festival in Germany the following summer, but split before they had a chance to appear at either event.

With a very sad, heavy heart we have to announce we can't continue in the present form of Rock Goddess. In...