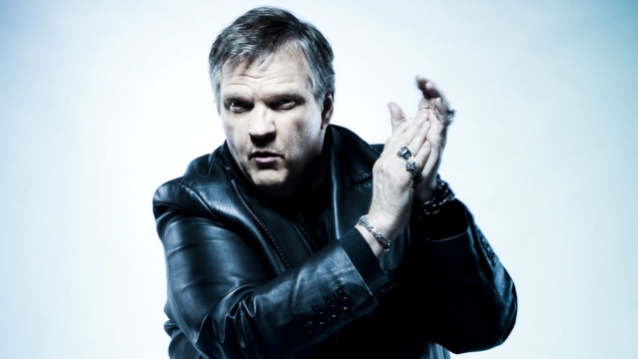 Brian May (QUEEN),Slash (GUNS N' ROSES),Dave Mustaine (MEGADETH),David Draiman (DISTURBED),Frank Bello (ANTHRAX),Dino Cazares (FEAR FACTORY),Todd La Torre (QUEENSRŸCHE) and SCORPIONS are among the rockers who have reacted to the passing of iconic rock singer Meat Loaf. He died on Thursday at the age of 74.

According to TMZ, Meat Loaf was "seriously ill" with COVID-19 just days before his death. The singer was due to attend a business dinner earlier this week for a show he was working on based on his classic hit "I'd Do Anything For Love" but canceled after becoming sick.

Meat Loaf had reportedly been outspoken about vaccine mandates. In May, he posted a clip of Eric Clapton and Van Morrison's anti-lockdown song "Stand & Deliver", writing, "Listen and Learn."

The news of his passing was confirmed on the musician's Facebook page by his family.

"Our hearts are broken to announce that the incomparable Meat Loaf passed away tonight surrounded by his wife Deborah, daughters Pearl and Amanda and close friends," the post said.

"We know how much he meant to so many of you and we truly appreciate all of the love and support as we move through this time of grief in losing such an inspiring artist and beautiful man," the family's post added.

"And if life is just a highway, then the soul is just a car
And objects in the rear view mirror, may appear closer than they are"
🥀 #Meatloaf

R.I.P Meat Loaf. Thank you for everything.

From stage to screen, you filled us with so much entertainment and energy, a true inspiration in many ways, RIP Marvin Lee Aday, known to us all simply as #Meatloafpic.twitter.com/Yxs3KfAZei

A gentle hearted powerhouse ockstar forever and ever. You were so kind. Your music will always be iconic. I'm sure you're singing concerts in the great beyond. Rest In Peace sir. #MeatLoafRIP#Meatloafpic.twitter.com/9twdJcOeP1

A complete original. Meatloaf was the exact opposite of what “success" in Rock & Roll was SUPPOSED to look like.The Anti-Plant. He WORKED being a Mystery Date “Dud" into the “100 Million Sold" that's the ONLY reason he's relevant to the Fancy Folk pretending to love him now.
🌹 https://t.co/PkxHhLHVH1