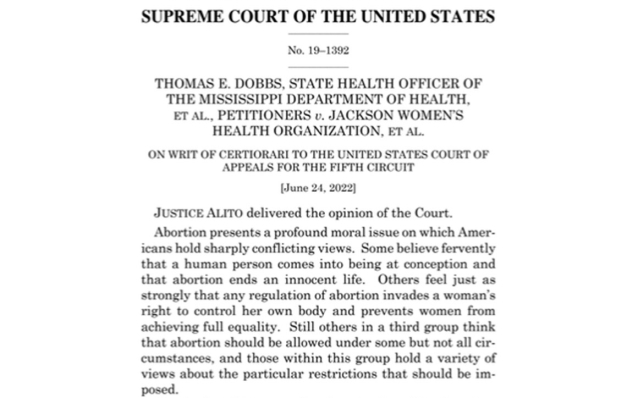 Rockers React To Repeal Of Roe v. Wade: 'The Religious Cults Are One Step Closer To A Theocracy'

PEARL JAM, David Draiman (DISTURBED),Alex Skolnick (TESTAMENT),Todd La Torre (QUEENSRŸCHE) and Brian Fair (SHADOWS FALL) among the musicians who have reacted on social media to the news that the Supreme Court ruled Friday (June 24) that Americans no longer have a constitutional right to abortion.

Today's decision overturns what was previously a federal legalization of abortion and has returned the issue to individual states to decide the matter for themselves.

(2/2) Today's decision impacts everyone and it will particularly affect poor women who can’t afford to travel to access health care.

We will stay active, we will not back down and we will never give up.

The government has no business telling anyone what they can and cannot do with their own body.

The religious cults are one step closer to a theocracy. What a travesty. We have turned the clock back decades for women. #handmadestale#muricahttps://t.co/w4yuShFiIs

Today they (Thomas/Gorsuch/Barrett/Kavenough – each of whom committed perjury in hearings) are forcing unwanted pregnancies upon women. Yesterday they forced more guns upon all of us. Next up, controlling sex lives, 1950s style, (no joke). THIS IS GOING TO BE WAR #roeoverturnedhttps://t.co/qkBjaDY0ET

“The States” = Mississippi, Louisiana, Texas and at least ten other States in control by extremists who are also plotting to deny women the right to travel to other States. No consolation

Amen. One stolen Supreme Ct seat (Gorsuch),Two sexual deviants who committed perjury (Thomas, Kavanaugh) + a jammed-through-at-the-last minute churchgoer on the fringe (Barrett). 3 out of 4 appointed by popular vote losing POTUS. It is DISGUSTING. Ashamed to be American today

Horrified but not surprised by SCOTUS decision to overturn Roe vs. Wade
Today and forever I stand with women in anger and mourning over their loss of personal liberty

Disgusted that non elected “justices” can strip away rights and 50 year old precedent, sending our country backwards. What rights will they take aim at next?