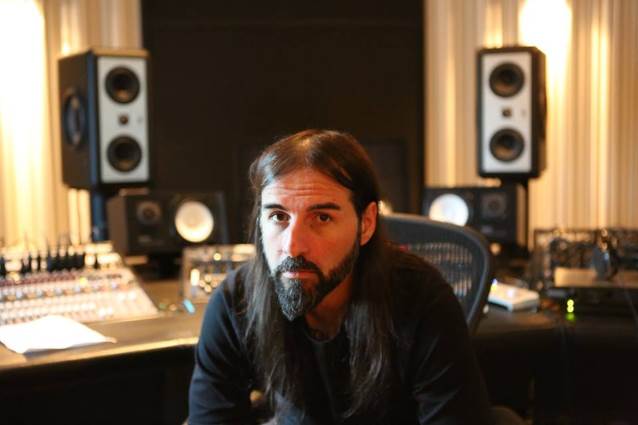 Greek extreme metal veterans ROTTING CHRIST have entered the studio to begin recording their brand new album, to be released in early 2019 via Season Of Mist. The disc will be produced by vocalist Sakis Tolis, and Jens Borgen (AMON AMARTH, KREATOR, DIMMU BORGIR, OPETH, KATATONIA) will again take on the job of mixing and mastering.

Regarding the new record, Sakis comments: "After almost two years on the road promoting and supporting our latest album, 'Rituals', the time has come to create its follower. An album that will be inspired by the intense artistic worries which arose during those two years on the road, and which seems to be our darkest and most mystical influences yet in our career! Thanks for the support all those years, we will not disappoint you!"

ROTTING CHRIST will make a select number of festival appearances this summer.

Asked in a recent interview with Pavillon 666 if he thought ROTTING CHRIST would last 30 years upon the band's 1988 formation, Sakis said: "It's a full life. No, of course [not]…you don't start the band to exist for 30 years or to be famous or rich or whatever the fuck. We just started the band because I wanted to sound like my idols back then. I wanted to play only one show and now I'm in a position where I've played 1,500 shows. And, no, I didn't expect something like this, but the spirit remains the same, even if I'm not that young. I still have the spirit and the hope that if we are in good health to keep playing with the band until our death. If health permits, of course. It's not up to me. If health does not permit, then I will not serve."

Pressed about what advice he would give to younger bands, Sakis said: "I don't know. I grew up in a very different era than nowadays. I remember I took the train with my band back in the '90s and we toured Europe on the train. It would be very hard nowadays for something like this to happen. I remember, myself, I did this without [making] money for 20 years, but I did it. I could survive because the situation wasn't like it is today. Things were better back in the day, or maybe more easy to make sacrifices like I used to make. So, if new bands want advice, it's just to concentrate on what they're doing and if they don't achieve something, that's no problem. Life is not only for them, everyone is good at something. For instance, if you tell me to do something else than music, believe me, it would be very bad. Someone else should be very good at something else. You need my music sometimes, I need your work. Everyone needs everyone. I suggest just be yourself, play your music, but be yourself, that's important. If you don't achieve something, no problem. Life is short, you should enjoy it."