On Friday, March 13, Metalzone.gr's Hellena Mihailidou conducted an interview with frontman Sakis Tolis of Greek extreme metal veterans ROTTING CHRIST about the band's long-awaited 2DVD + 2CD digipack, "Non Serviam - A 20 Year Apocryphal Story", which was released in Europe on February 23 via Season of Mist. Watch the 27-minute chat below.

Due in the U.S. on May 5, "Non Serviam - A 20 Year Apocryphal Story" features the band's most popular and classic songs, including some rare treats, to celebrate their special 20th anniversary show in their hometown Athens in front of a fanatic audience in December 2007. Completing the package is a bonus DVD filled with extra footage from the "Sanctus Diavolos" and "Theogonia" tours, an interview with Sakis Tolis telling the story of the band, bootlegs live videos, promotional clips and much more. Last but not least, these five hours of video are backed by two audio CDs taking up 25 tracks from the Athens show plus seven exclusive tracks recorded live in February 2007 at B-Live in Larisa, Greece.

Sakis previously stated about the DVD shoot: "It was something amazing! We had 1,500 fans who knew all the songs and were singing with us. I am really happy about the result of this concert."

Check out pictures from the concert at Metalzone.gr. 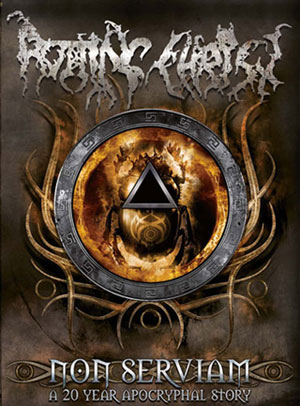