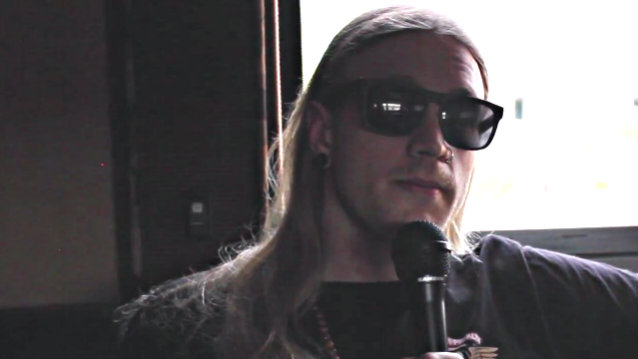 SABATON Drummer On Becoming First-Time Father: Everything Has Changed 'For The Better'

The Age Of Metal recently conducted an interview with drummer Hannes Van Dahl of Swedish metallers SABATON. You can now watch the chat below.

Speaking about recently becoming a father to his first child with his partner, NIGHTWISH singer Floor Jansen, Hannes said: "[The baby and the mom are both] super-healthy, and I couldn't be happier. I'm so fortunate that everything went so well. But how it has changed me so far? Only for the better. And one thing that I didn't really expect was that kind of… All of a sudden you get something into your life that's more important than anything else, which makes all the other stuff much more enjoyable."

He continued: "Maybe people with children will understand this, but… So you have something that's more important, and then drumming became to me less serious, but I play better and I have more fun, because I relax much more, 'cause I don't take it that super serious. It's still serious, of course, and I love it, but I can enjoy it in another way. Which I didn't expect that to happen, but I'm having more fun touring and playing music than I've ever had, I think, and coming home is better than it's ever been."

Hannes added: "It's just really great. People tell you how it's going to be and what's going to happen, how you're going to feel… The only thing I can tell… I will tell people that will become parents or would like to or whatever, everything is for the better and it's just super nice. And that's it. That's what I think at least."

Van Dahl recently sat out some shows on SABATON's European tour so that he could spend time with his family. Fillling in for him was Daniel Sjögren (TWILIGHT FORCE, BLOODBOUND).