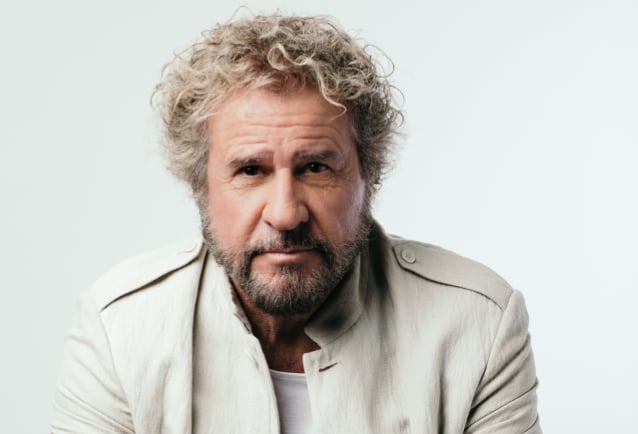 Sammy Hagar has once again weighed in on the proposed all-star VAN HALEN tribute concert, saying it would be "fantastic" to play with Alex Van Halen and Michael Anthony again.

No progress has been reported on a possible VAN HALEN tribute show since April when former METALLICA bassist Jason Newsted revealed to The Palm Beach Post that he was approached by the VAN HALEN drummer about six months earlier about playing bass for the project. Newsted told the Florida newspaper that he agreed to go to California to jam with Alex and legendary guitarist Joe Satriani and see if it felt right, but he eventually realized that it would be impossible to do justice to VAN HALEN's legacy.

During an appearance earlier today (Wednesday, November 2) on SiriusXM's "Trunk Nation With Eddie Trunk", Hagar was asked if there have been further developments about a VAN HALEN tribute concert in recent weeks. He responded (as transcribed by BLABBERMOUTH.NET): "As far as I know, [there has been] nothing. There was that talk everybody heard about Jason being the bass player and Joe Satriani playing guitar and Alex and all that. Then I got the call from the management, I got the call from Irving Azoff, [who] said, 'Hey, you wanna do, you and Mike and Al with a superstar guitar player?' I said, 'I'll do anything with Al and Mike and play music with people, but it's not gonna be VAN HALEN. There is no VAN HALEN; I don't care what anyone says. Wolfie is VAN HALEN, okay?" he said, referencing Eddie's son Wolfgang, who replaced Michael in VAN HALEN back in 2007. "And he doesn't wanna be the VAN HALEN copy band. I don't blame him; he's doing a great job on his own stuff, and it's very cool when he jams a little bit here and there. He's VAN HALEN, and if he wanted to play guitar with Al and Mikey and myself, I would love to do that. That would be just one time for the big time. Not like, 'Okay, let's go out and tour the world and make records.' No, no, no, no. There is no VAN HALEN, but to play with Al and Mike and a great guitar player for some event — almost like the event that [FOO FIGHTERS leader] Dave Grohl put on for Taylor [Hawkins], something like that would be fantastic. But other than that, no."

When interviewer Eddie Trunk brought up Wolfgang's recent interview in which Van Halen heavily hinted that David Lee Roth is the hold-up in realizing an Eddie Van Halen tribute concert, Sammy said: "It ain't just one guy. Alex Van Halen and I don't talk. I reached out to Alex. I'm gonna tell you right now — I reached out to Alex again recently. Mikey had a sad thing happen in his family, and I reached out to Al, and he wouldn't return my call or my e-mail. And so I said, 'You know what? Fuck it. It's not on the top of my list, my agenda. I think Eddie deserves, definitely, a tribute… And the whole world would show up and the whole world would do it.

"I don't know why people put it on Roth," Sammy continued. "I don't talk to Dave. And if he did it, he'd wanna do it without me. I'm sure that's part of the dysfunction that Wolfie's talking about. I'll make a statement that I don't know is true or not, but what do you wanna bet that he goes, 'I will only do it if Hagar's not there.' And if that were the case, that's typical Roth, and that's part of the dysfunction. It's not like he controls it; it's just [that] he doesn't play well with others. And like I said, if Alex came to me and wanted to do it, I'm in. Absolutely — let's go [and] do it somehow. But Alex has got a stick up his ass about something with me still, and he's gonna take it to his grave, I guess. [I made peace with Eddie before he died but] I don't think I made peace with Al. And I don't think I'm going to unless he reaches back out to me. I've done it about five times now."

Hagar clarified: "I'm not trying to start a feud between the two of us. But I love the guy, and I love VAN HALEN, what we did together… Al is the most stubborn Taurus. He's a Taurus, and he's the most stubborn Taurus. Tauruses are known for [being] stubborn. He's a Dutch Taurus, and he is the most stubborn, hard-headed guy you'll ever meet in your life. And he is tough to [break] down and to let go. Nope — he's holding on to something. And I just wish he wasn't like that. I love the guy. Like I've said a million times, Alex and I actually got along better than Ed and I at times. Through the hard times, Alex and I still got along. But I don't know what happened. Somebody poisoned him. Somebody told him something. Maybe he still doesn't like my book, which was the most honest thing I've ever done in my life. Some people just don't think that that should have been done."