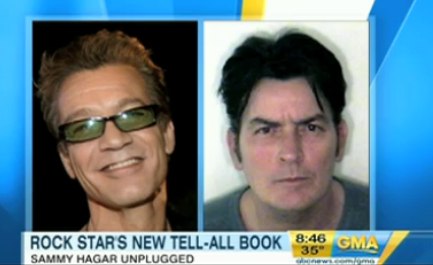 "I don't know what's going on, but, boy, there's a similarity in the way they look and everything," Hagar said before adding. "I don't know how you get like that."

Hagar also admitted that his newly-released autobiography, which spills a lot of dirt about his days with VAN HALEN, probably makes a reunion between them unlikely. "With this book coming out, the chances are probably below zero," he laughed. "But, once ... Eddie puts his book out and tells them what he thinks about me probably, then maybe we can do it again."

Hagar's book, "Red: My Uncensored Life in Rock", arrived in stores last week. Hagar repeats in the book his claim that he was once abducted by aliens.

VAN HALEN reunited with singer David Lee Roth in 2007 for a massively successful world tour, and announced in January that they were entering the studio to record the first album with Roth on the mic since 1984.