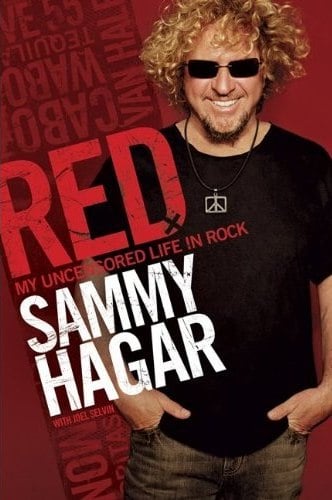 A new five-and-a-half-minute promotional video for legendary rocker Sammy Hagar's upcoming autobiography, "Red: My Uncensored Life In Rock", can be viewed below.

Hagar recently told Rolling Stone magazine he would jump at the chance to record with VAN HALEN again. Hagar, who, along with ex-VAN HALEN bassist Michael Anthony, is currently enjoying his time in CHICKENFOOT, will release "Red: My Uncensored Life In Rock" on March 15. Although VAN HALEN is reportedly ensconced in the studio with David Lee Roth, Hagar is open to a reunion with the Eddie and Alex Van Halen, telling Rolling Stone, "I would love to make another record with VAN HALEN. If Eddie really got his life together, which it seems he has judging by the pictures I've seen, then definitely. There's no rumor. There's no reason to say, 'Yes, I've got this vibe going on.' Right now, zero chance. When my book comes out, zero for a while. But someday, before we all die. . . We might be in our 90s though."

When asked whether he thought writing a book which deals so intimately with his problems with Eddie Van Halen is ultimately burning a bridge to future collaborations, Hagar added: "I don't consider them burning bridges at all. When I first joined the band, dirt was going back and forth between us and the former lead singer. I didn't burn any bridges. They eventually put the bridge back. Time washes everything clean. To be honest, (his ex-wife) Valerie (Bertinelli) said almost all the same stuff in her book about Ed. The only thing I did was talk about my personal relationship with him. I had almost 10 fantastic years in that band. It was a dream come true for any musician on the planet. We had the greatest relationship and the greatest run and wrote some of the greatest music. We had five Number One albums and sold 50, 60 million records together. We practically sold out every venue in the world."

Hagar, who last performed with VAN HALEN in 2004, went on to say, "The last two years were really rough. Everyone immediately goes to the dirt, but quite honestly being in VAN HALEN was one of the greatest experiences in my life. I wouldn't trade it for anything. I'll take the dirt right with it."

Back in 2007 only Hagar and Michael Anthony — the two ousted members of the band — were on hand for VAN HALEN's induction into the Hall of Fame. Hagar told The Pulse Of Radio that the honor ranked highest in his eyes. "I could get another platinum album, or I could get another award of some kind, but this is the one that says, 'OK, you sold 60, 70 million records, you've done this, you've done that' — and then they put you in the Hall of Fame, saying 'You deserved it,' y'know what I mean — instead of 'you just got lucky,'" he said. "There's a lot of guys with platinum records on their walls that maybe won't ever be in the Hall of Fame. It's awesome. This validation is smokin', man."