This Friday, April 11, New Wave Of British Heavy Metal legends SATAN will play their first-ever show in the USA. 34 years after the band's formation in Newcastle Upon Tyne, they will headline a three-band event in New York City to kick off the U.S East Coast leg of their "Live Sentence World Tour". All six North American shows — including those in Philadelphia, Pennsylvania; Baltimore, Maryland; Richmond, Virginia; Worcester, Massachusetts; and Montreal, Quebec, Canada — will be recorded for a possible live album release.

The SATAN members are still buzzing from recent dates in Europe and South America and have promised "life-changing" performances for those long-neglected North American fans.

Midwest and West Coast dates are currently being lined up for October.

"Life Sentence" was mixed by Dario Mollo, who is part of TONY MARTIN'S HEADLESS CROSS touring project and has worked with numerous artists as a producer and engineer, including SKYCLAD, ANATHEMA, CRADLE OF FILTH, LACUNA COIL, Tony Martin and Glenn Hughes. The CD was recorded September-November 2012 at First Avenue Studios in Newcastle, England and was mixed and mastered by Mollo at Damage Inc. Studio in Italy. The songs deal with the following topics: injustice, impending death, reincarnation, atonement, third-world politics, and biblical retribution.

Fan-filmed video footage of SATAN performing on June 8, 2013 at the Sweden Rock Festival in Sölvesborg, Sweden can be seen below. 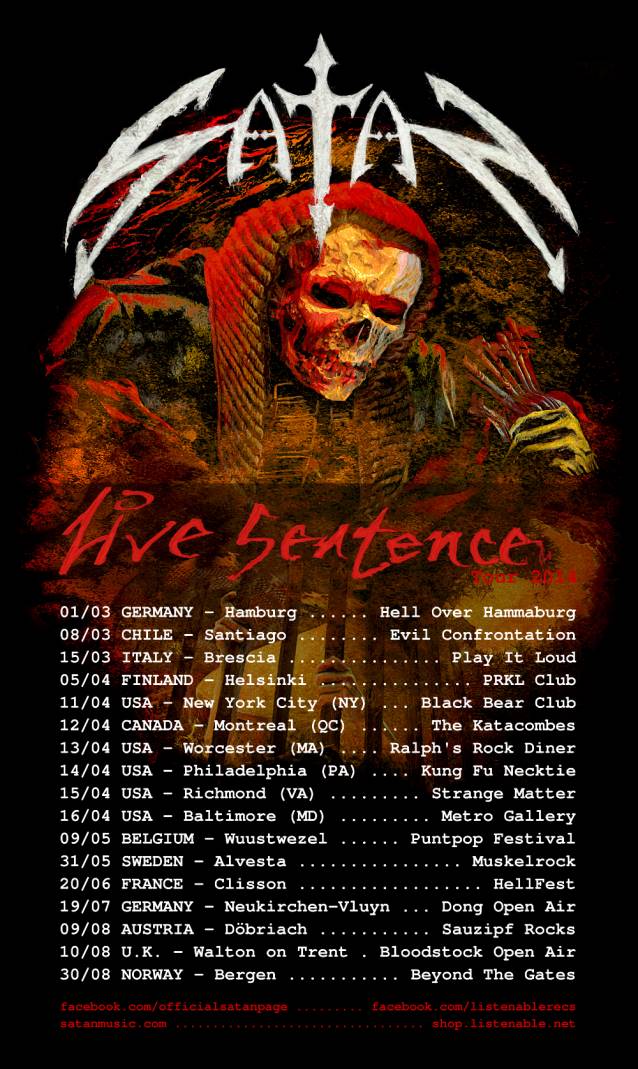