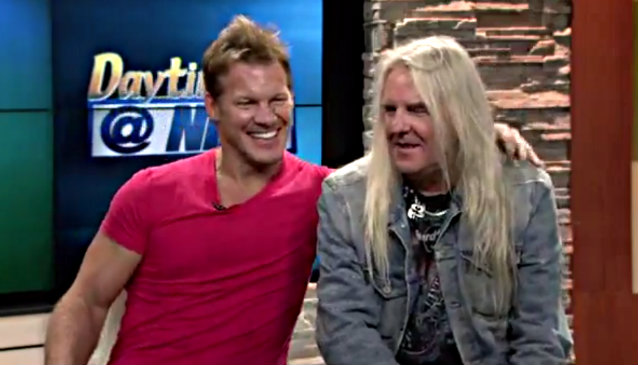 Last fall, FOZZY singer Chris Jericho and SAXON frontman Biff Byford were interviewed on "Daytime At Nine", which airs on KABB-TV, the Fox affiliate in San Antonio, Texas. You can watch the segment below.

SAXON's new album, "Unplugged And Strung Up", sold around 500 copies in the United States in its first week of release.

Issued on on November 18, 2013, "Unplugged And Strung Up" reveals layers and pieces previously dormant in many of the 14 classic SAXON songs chosen for this makeover, thanks to some ear-catching new arrangements and mixes. Recorded, mixed and mastered with Andy Sneap in Derbyshire, U.K. earlier this year, "Unplugged And Strung Up" contains re-evaluated, re-worked and re-energized versions of "The Eagle Has Landed" and "Crusader" by introducing orchestral dynamics to offer added dimension. "Frozen Rainbow", from the band's 1979 debut, gets a stunning acoustic reprisal which transports it into a power ballad to be proud of, while "Red Star Falling" soars and sweeps the emotions with its orchestrally arranged dovetail.