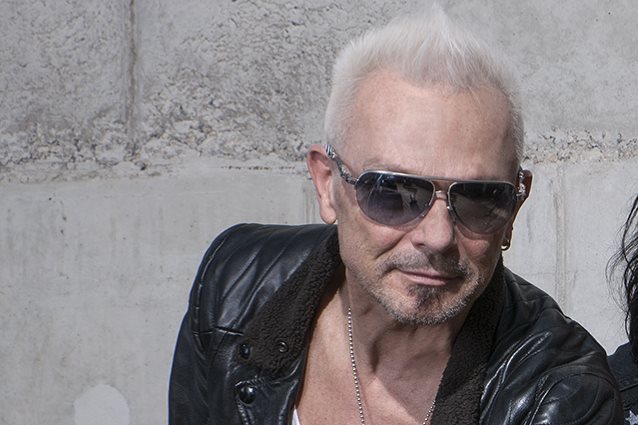 SCORPIONS Guitarist On Split With Drummer JAMES KOTTAK: 'You Can't Really Count On Somebody Who Is Not Stable'

In a brand new interview with "Rock Talk With Mitch Lafon", Rudolf Schenker spoke about the addition of former MOTÖRHEAD drummer Mikkey Dee to the SCORPIONS ranks. Last September, the Swedish musician was named as a permanent replacement for SCORPIONS' longtime drummer James Kottak, who was dismissed from the band during his well-publicized his battle with alcoholism.

"I'm very sad about James [no longer being in the SCORPIONS]," the SCORPIONS guitarist said (hear audio below). "I always thought that he would be until the end with us. But somehow surrounding maybe a wife and all this kind of things, which was, let's say, beating him, he really changed. And we gave [him] a lot of possibilities. We paid [for] his rehab and we tried to really make things happening. But then, somehow, when Mikkey Dee came in and we noticed that maybe the traveling, going from Los Angeles to Europe so often again, it's also a fact of that [James] was not stable. So being in business class or first class, traveling from America to Europe, there's everything there and you can really party even by yourself. But somehow we tried to get James on the right track, and we were waiting for the last three years, actually — since 'MTV Unplugged', at least. And we couldn't change it. To book a tour and then also traveling around the world and everything is set up, the crew, you can't really count on somebody who is not stable. So in this case, when Lemmy died — he was always a big fan of the SCORPIONS, and we were big fans of MOTÖRHEAD — somehow, somehow destiny was calling. Because then we weren't sure. What do we do? When we go to America, can we maybe count on James? So we told James, 'James, stay a little bit longer in rehab.' And then Mikkey came in, and somehow it's like really something that… He actually was so happy to come to the SCORPIONS, because he knows from the inside of MOTÖRHEAD how Lemmy was talking about the SCORPIONS. And Mikkey was, actually, also always a SCORPIONS fan. This was like love at first sting, love at first sight. We played, we rehearsed and things came together."

He continued: "[We called] James and said, 'James, it's maybe better you setting something up in Los Angeles instead of traveling always with your sickness still in your bones, traveling to Europe and maybe you notice that you don't have the energy left to do what you wanna do.' So in this case, we said to Mikkey Dee, 'Mikkey, you're our guy.' We had to make a decision, and somehow destiny was happening because of the death of Lemmy. It was the right timing. Matthias [Jabs, SCORPIONS guitarist] called Mikkey Dee, Mikkey was ready and we started working together."

According to Rudolf, Dee has brought "new energy" to the SCORPIONS, which is "sometimes important. But we would like to have James in it," he said. Still, Schenker remains practical about the personnel shuffles in the SCORPIONS camp. "In these fifty-two years now of our career, yeah, we had a few changes because we always were looking into the philosophy when I started the band in '65… Music is the first thing and also having people around with the right chemistry and having people around you can build a friendship with," he said. "And I think this is the point which carries the fifty-two years with the SCORPIONS, and that's the reason why now Mikkey Dee is there. To James, we know that somehow he would not have the power to really make it. Mikkey is next door to us in Gothenburg, in Sweden, and he is by car… He drives, actually, a Lamborghini Huracán, so he is in one and a half hour, maybe in two and a half, next door here in the studio and is rocking [with us]."

SCORPIONS and MEGADETH will join forces for a North American tour which will kick off on September 14 in Reading, Pennsylvania and conclude on October 15 in Tampa, Florida. The sixteen-date trek, dubbed the "Crazy World Tour", celebrates SCORPIONS' 1990 LP of the same name. Two of the SCORPIONS' best-known songs, "Winds Of Change" and "Send Me An Angel", both appear on "Crazy World".