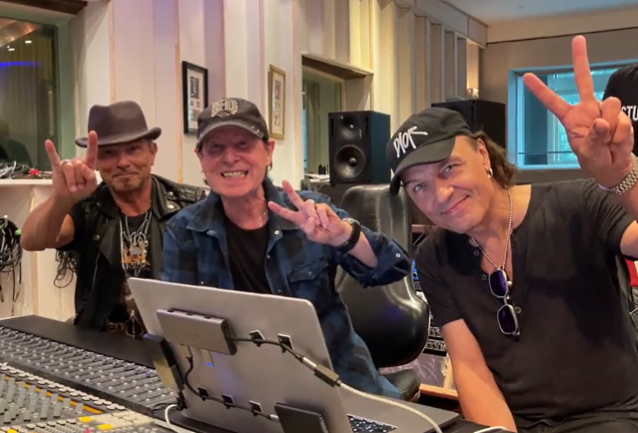 SCORPIONS have shared the first snippet of their upcoming album. The LP is currently being mixed at the legendary Hansa Studios in Berlin, Germany with engineer Michael Ilbert, who has earned multiple Grammy nominations for his mix work with producer Max Martin on albums by Taylor Swift and Katy Perry.

Earlier today, SCORPIONS singer Klaus Meine, guitarist Rudolf Schenker and guitarist Matthias Jabs checked in from Peppermint Park Studios in Hannover, Germany, where most of the recording sessions for the new disc took place. Klaus, who celebrated his 73rd birthday last month, stated in a video message (as transcribed by BLABBERMOUTH.NET): "We're in the studio right now, as you can see — Peppermint Park in Hannover — and this morning, we decided to give you guys a little snippet.

"We're here for a year," he continued. "We spent so much time in here working with the recording sessions. And right now it's so very exciting to finally listen to the mixes coming in from Berlin the other day. And we just wanted to share this moment with all of you out there. And believe me, we can't wait — not only to give you a little snippet but to play you the whole damn album. All right? And we'll see you out there."

Tentatively due later this year, SCORPIONS' new album will mark their first release since 2017's "Born To Touch Your Feelings - Best Of Rock Ballads", which was an anthology of new and classic material.

Meine previously told Talking Metal that the goal with using Fidelman to produce the new LP was to bring "the old vibe from albums like 'Blackout', 'Love At First Sting' or even 'Lovedrive'. We try to focus on those albums and this attitude," he said. "If we get there, who knows — it's so many years later. But it's the spirit and it's the whole vibe around this album. This time, the focus is on the harder songs."