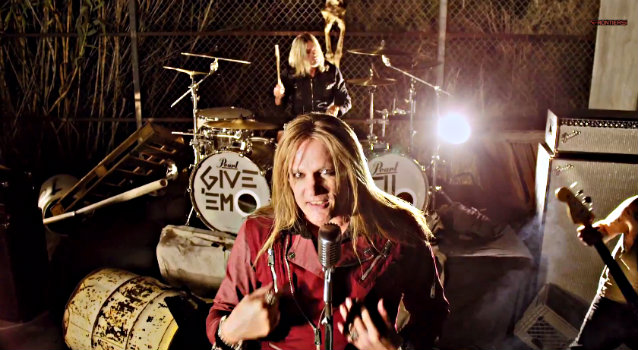 SEBASTIAN BACH: 'All My Friends Are Dead' Video Released

The video for the song "All My Friends Are Dead" from former SKID ROW singer Sebastian Bach can be seen below. The clip is dedicated to a number of fallen hard rock/heavy metal musicians that we lost way too soon.

"All My Friends Are Dead" is taken from Bach's new solo album, "Give 'Em Hell", which is being released on April 22 via Frontiers Records. The follow-up to 2011's "Kicking & Screaming" was once again produced by Bob Marlette, who has previously worked with ROB ZOMBIE, BLACK SABBATH and SHINEDOWN, among others.

Of the new album, Sebastian Bach enthused: "I could not be more proud of the new CD, 'Give 'Em Hell'. As a rock music fan myself, I listen to it every single day. As a musician, I honestly feel like I have reached a new level of album recording. As an audiophile, I could not be more blown away by the sound! The production and mastering sound so good that it's perfect to show off your high-end stereo system.

"Ever since my first record, 'Skid Row', on through 'Slave To The Grind' up to 'Kicking & Screaming' and 'Angel Down', I have always been concerned, first and foremost, with making quality records for my fans. And I can honestly say that 'Give 'Em Hell' meets or even exceeds the standards set by some of the records I have put out in the past.