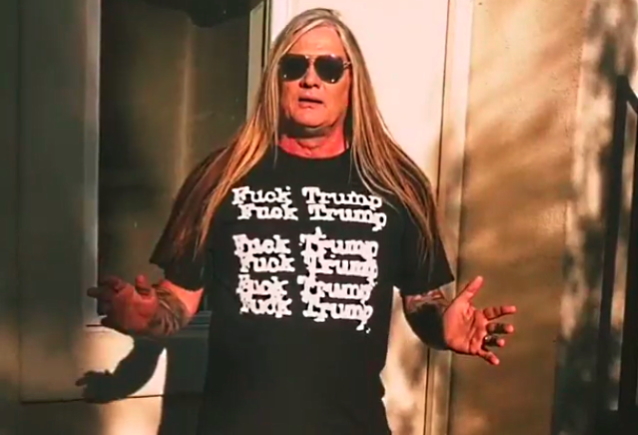 Sebastian Bach has urged his fans to make their voices heard in next week's presidential election, saying in a video message that they should "vote for rock and roll music over reality television."

The former SKID ROW singer donned a "Fuck Trump" t-shirt but did not explicitly back Democratic challenger Joe Biden in his message, focusing instead on the issues he said had hindered the U.S. from adequately tackling the coronavirus pandemic.

"Here's the situation: all of us have had our lives stopped since March 2020," he continued. "It's now gonna be November. We all want our lives back. In order to change our lives back to normal, we have to put somebody in charge that has a plan — not give another four years to the guy that stopped everything. It doesn't make sense.

"Do you understand how heavy this is?"

Bach added: "My kids have a chance to maybe go back to school. Everybody's scared, because they don't know if it's safe or not, because nobody's in charge. We need somebody in charge.

"I would never tell anybody who to vote for. I would never do that. I would never, ever try to influence anybody into, say, 'Hey, vote for this guy.' I would never do that. Never would I say those words. What I would say is this: vote for science, so we can stop the virus and go back to work, like before. Vote against racism, because racism is for assholes. Don't be an asshole. Vote for the climate, because it's a hundred thousand degrees. The world is burning, and there's hurricanes all the time. So vote for the climate. Most importantly, vote for our children. As adults, it's our job to leave the planet for our kids better than when we came into it.

Bach frequently criticizes Trump's policies on Twitter. This past July, he told Esquire that he missed "smarts" in the White House. "I can't watch footage of JFK from 1962," he said. "I can't even watch that shit because I'll cry. Because motherfucker is so cool and so smart and hates racism. And then we have this fucking jackass. And it's just not fair to the country. I put Barack Obama in the same category. When I watch him speak, it rips my heart out because he makes you feel safe."

In August 2019, Sebastian lambasted America's 45th president, Senate Majority Leader Mitch McConnell, Vice President Mike Pence and other Republican leaders for their inaction on gun regulation. A month earlier, Bach made headlines when he said that he "would do a better job" running the county than Trump.

In a 2018 interview with TheRecord.com, Sebastian revealed that he voted for Hilary Clinton in the 2016 U.S. presidential election.

Is this the last ever weekend of the United States of America? On Tuesday we have the chance to make things better and go back to normal. Or have things stay the same as they have been since March and watch everything get exponentially horrifyingly worse. It's up to us America 😷 We can either vote for rock and roll or we can vote for reality television We can either vote for #science or we can vote for fiction Who are we?