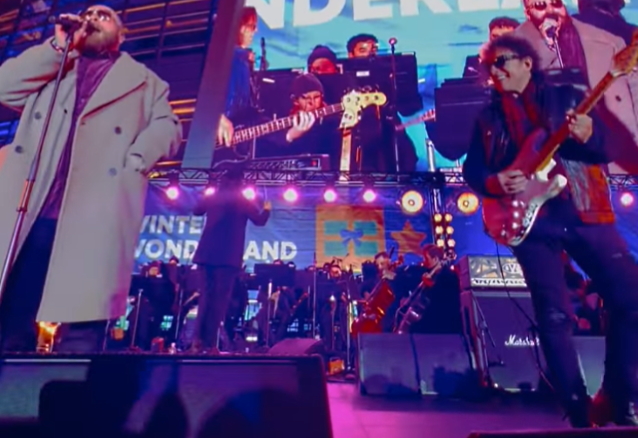 Neal Schon, San Francisco guitar legend and JOURNEY founder, performed with very special guest Teddy Swims, who is nearing one billion streams of JOURNEY's "Don't Stop Believin'" at the annual tree-lighting ceremony in San Francisco featuring the Bay Area's largest tree standing at 90 feet tall. They were accompanied by the San Francisco Philharmonic Orchestra and friends as they kicked off the holidays with a special concert on Wednesday, November 30. Video of their performance can be seen below.

This past August, Schon and Swims joined pianist and singer Kodi Lee to perform "Don't Stop Believin'" on "America's Got Talent".

Just a few days earlier, Swims released his official cover of "Don't Stop Believin'", three months after his performance of the track went viral on YouTube, Instagram and TikTok.

The 30-year-old vocalist, who hails from Conyers, Georgia, embarked on a career in soul music after listening to Al Green. Swims also went to beauty school and played in hair-metal cover bands. Now he's got millions of followers.

The November 30 performance marked Schon's first live appearance since he filed a lawsuit against JOURNEY keyboardist Jonathan Cain in California state court, alleging that Cain set up an American Express card without telling Schon and that "millions of JOURNEY funds have flowed through it." Cain, for his part, accused Schon of misusing the card, citing his "excessive spending and extravagant lifestyle."

Three and a half years ago, Schon and Cain were embroiled in a legal dispute with former JOURNEY drummer Steve Smith and Valory. The parties "reached an amicable settlement agreement" in April of 2021.

Jessica and the SF Phil keep hitting homers out of the park. As orchestra President I am biased…but facts are facts…we keep the cool gigs coming!!

Had a blast the the Warriors Christmas tree lighting ceremony outside the Chase Center. We were honored to be a part of the charity.
Teddy Swims Neal Schon vid by LadyM🌹xx