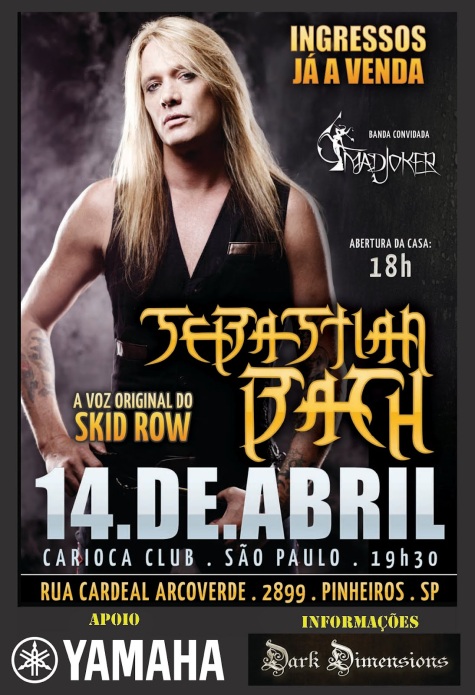 SEBASTIAN BACH To São Paulo Fans: 'Please Try And Understand We Are People Just Like You'

After the show, Bach posted the following message on his Facebook page:

"Well, that was crazy. Thank you, São Paulo, for being an incredible crowd tonight.

"It is frustrating for us to play in smaller venues sometimes. The crowds are insane and we just got physically attacked trying to leave the venue. Hair was pulled, crew members got punched, my ears are blown because of the sheer excitement and pandemonium playing this place tonight.

"I know you all want a picture, but we can only do so many pictures with you all. It's impossible to take a picture with every single one of you.

"After playing stadiums here for years, playing the theatre tonight just didn't make sense. We had to do an early show to make room for the samba band coming in after us and it really wasn't fair to the band or the fans.

"Doing four cities in four nights by plane is insanely gruelling and it's hard for the fans to understand how physically demanding this is.

"I would love to hang out with you all, but everyone gets so excited they just grab and pull and scream and it's not that much fun to be grabbed and yanked and pulled at for hours on end.

"We try to give all our energy onstage, so please try and realize we are just human beings when we are done with the show.

"If I dont feel like posing for pictures for hours on end, it doesn't mean I don't like you. It means that I would rather maybe talk, hang out, relax a little.

"Please try and understand we are people just like you.

"If I walked up to you and pulled your hair or screamed at you, maybe you wouldn't like it either.

"We are on a crazy schedule, so please bear with us.

"Don't shoot me — I'm only the piano player, okay!

"Thanks, São Paulo. See you again in a couple of days!"

Bassist Jason Christopher — who filled in for Shawn Economaki during STONE SOUR's spring 2011 tour and who previously played with SLIPKNOT/STONE SOUR frontman Corey Taylor in the JUNK BEER KIDNAP BAND — recently joined Bach's solo group. Bach said, "I have known Jason for years, ever since he tried to pickpocket me at the Rainbow [in West Hollywood] aeons ago."

Bach completed a short run of North American dates in February and is scheduled to take part in the Rock 'N' Roll Allstars tour, which will hit the road in South and Central America in late April/early May.