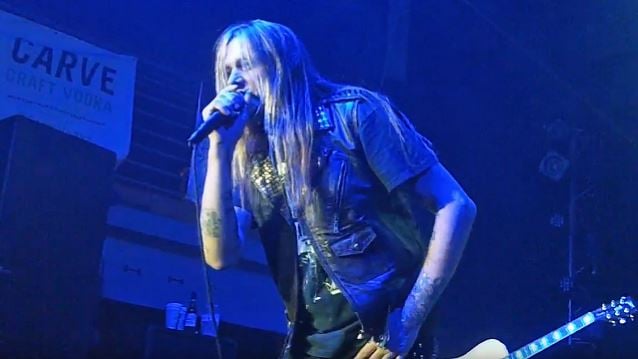 During a brand new interview with Las Vegas Weekly, ex-SKID ROW singer Sebastian Bach was asked if he has sent a copy of his long-awaited autobiography, "18 And Life On Skid Row", to his former bandmates. He responded: "I would need their address to do that, which I don't have. [Laughs] All I can say is that I'm not out to make anybody mad or piss anybody off. Maybe I will, maybe I won't, but I would welcome the other guys in SKID ROW to write their own book on their side. Because this is what I remember. But at the same time, when you read about all of the substances we were ingesting, I'm not saying that I'm even 100 percent right. You know, it's like when Nikki Sixx [of MÖTLEY CRUE] writes 'The Heroin Diaries' — was he really keeping a diary when he was shooting heroin? I don't think so. How many heroin junkies are keeping a diary?"

Bach went on to say that he hopes his book lays additional groundwork for a reunion of SKID ROW's classic lineup. "You know, someone said that five guys that haven't been together in 25 or more years standing together, that is art," he laughed. "In and of itself. It's like when the Rock And Roll Hall Of Fame inducts CHICAGO, and Peter Cetera doesn't come. It's such a drag! Or JOURNEY without Steve Perry. The whole planet wants to see and hear Steve Perry again, so I totally get it. The fact that five guys are still alive — take advantage of that. A lot of bands can't say that. We're losing all of our favorite bands. I don't need to go down the list, but Glenn Frey, Prince, Lemmy, David Bowie. It's unreal."

Bach confirmed to Eddie Trunk earlier in the month that there have been preliminary discussions about his reunion with other members of the classic lineup of SKID ROW. He said: "All I can say is that [my manager] Rick [Sales] is talking to [SKID ROW's early manager] Doc [McGhee]. That's all I can say. That is what is happening, and I don't have anything else to tell you. All I can tell you is we're not getting any younger, folks. [Laughs] Let's put the hair band back together while we've got hair. [Laughs]"

"18 And Life On Skid Row" came out on December 6 via Dey Street Books (formerly It Books),an imprint of HarperCollins Publishers. In the book, Bach is brutally frank in his description of life on the road and exploits with METALLICA, Ozzy Osbourne and GUNS N' ROSES, among others.