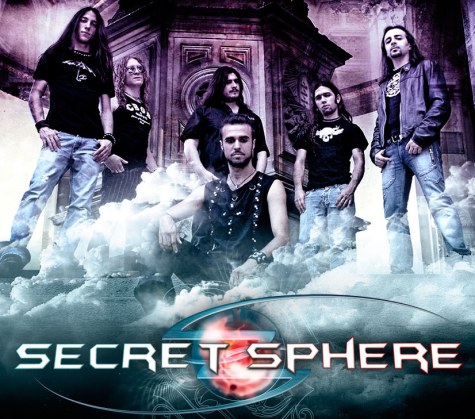 Due to a "bad illness," singer Ramon R. Messina of long-running Italian power metallers SECRET SPHERE is sitting out the first three shows of the band's European tour with GAMMA RAY. His temporary replacement is Alessandro Conti, singer of the Italian band TRICK OR TREAT.

SECRET SPHERE entered the new Authoma Studios on December 6, 2009 to begin recording their sixth album, "Archetype". The band spent two months working on the CD, which is being produced by guitarist Aldo Lonobile and Federico Pennazzato. The album will be mastered at Massive Arts Studio, while the artwork will be handled by Gustavo Savez.

Comments Aldo: "The musical direction will keep strongly the SECRET SPHERE trademark, with lots of melodies, orchestration and heavy riffs and great solos. It's not a big departure from what we have done in the past, but we feel that we've integrated some new elements that enhance upon everything we've ever done, making this one of our (if not THE) strongest albums to date. Some of the songtitles are 'Mr. Sin', 'All In A Moment' and 'The Scars That You Can't See'. We're ready to deliver a great album, and show you what our new members Marco [Pastorino; rhythm guitars] and Gabriele [Ciaccia; keyboards and piano] can bring to our music."

Regarding SECRET SPHERE's participation in GAMMA RAY's European tour with FREEDOM CALL, Lonobile stated, "It's an honor for us to be supporting GAMMA RAY. They are one of the main exponents of all things power metal, and they have definitely been a big inspiration on our music in the past. Kai Hansen (GAMMA RAY's band leader) is known worldwide for his importance on the metal scene, through his time in HELLOWEEN till his own band GAMMA RAY, and for us to be touring with him and his band is something we've only been dreaming of one day happening. We're looking very much forward to this tour, and to see all our loyal fans out there around Europe and hopefully make new friends and fans."

"Sweet Blood Theory", the last album from SECRET SPHERE, was released in October 2008 via Dockyard 1. The CD was recorded between December 2007 and February 2008 at Authoma Studios by Federico Pennazzato and mixed in March 2008 at Germany's Indiscreet Audio by Achim Köhler (PRIMAL FEAR, BRAINSTORM).