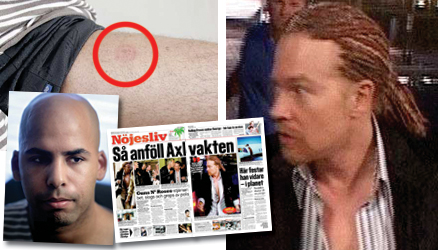 Security Guard: 'AXL ROSE Was Going To Kill Me'

The hotel security guard who was involved in a brawl with GUNS N' ROSES frontman Axl Rose the morning after the band's concert in Stockholm, Sweden has broken his silence on the incident.

Pascal Håkansson (photo#1, photo#2),25, who was working his fourth day as a security guard at the Berns hotel when he was allegedly assaulted by Rose, spoke exclusively to the Swedish newspaper Aftonbladet about the Tuesday morning (June 27) altercation.

"Axl came alone to the hotel and went up to his room," Håkansson said. "He came back again in the company of some sort of coordinator — an older woman, who was his 'mom.'"

According to Pascal, what was about to happen turned out to be the most bizarre thing he's experienced in his five years as a security guard.

"Axl was pissed off because people had left him alone at some party," Pascal said. "He was loaded, in a bad mood and started cursing at the woman. When he started banging on the walls, I approached him and asked him to lower his voice."

When Axl ignored him, the security guard approached the assistant instead.

"Then Axl turned around and pushed me in my chest and neck," Håkansson said.

"I totally lost balance. I wasn't prepared and I had to kneel for a moment in order to be able to remain standing. Then he jumped me and started fighting. I had to fend off a few punches, on my arms, for instance. Then I got hold of his neck and got him down on the ground. We wrestled for about a minute; he was strong."

And that's when he bit you?

"Yeah, but it wasn't until afterwards that I felt it. When you get such a rush of adrenaline, you don't feel anything. He could have had Hepatitis B or something. It was very uncomfortable. In general, it's disgusting to bite people."

When you were lying there on the ground, were you able to get both his arms in a lock?

"No, it wasn't possible. He was wild. He was totally wild. He was gonna kill me. 'I'm gonna fuck your life up,' he screamed."

At the same time as Axl Rose's bodyguard came down to the lobby, the reception called the police.

"Axl was stark-raving mad," Pascal continued. "The bodyguard tried to calm him down, but Axl threatened to fire him if he intervened. That's when he threw a vase into an antique mirror."

How did Axl look?

"He had a crazy, disturbing look."

"Yes, he was intoxicated, by alcohol or something."

"He was still bouncing up and down screaming that he was gonna make my life a living hell," Pascal said.

What happened to you when the police detained Axl and drove away to the police station?

"I was upset. I sat down and talked to the staff at the reception. One of the girls was sad after what had happened. I wrote a report. Then the police called and wanted me to go to the hospital."

What did they check you out for at the hospital?

"If my skin had broken, but it hadn't. It was mostly a superficial wound."

Did you have time to be afraid? According to you, he seemed to be totally out of control.

"I have worked a lot as a bouncer at nightclubs and have become somewhat desensitized. I didn't have time to be afraid. But afterwards, it hit me. He was totally crazy. Anything could have happened."

Why have you been laying low until now?

"You have to reflect a bit before going public."

Axl Rose has admitted the crimes and will pay you 10,000 SEK (approximately $1,400) in damages. Have you heard anything from him since this incident?

"No one has called me. Not the police, not the District Attorney, not Axl's crew. It wold be nice to get an apology."

Will you proceed with this matter?

"I'm going to contact a lawyer to see what options are available. If this would have happened in the U.S., I probably would have been a millionaire," Pascal said with a smile.

Håkansson is now off work for a week before returning to his position as the security guard at the lobby of the Berns hotel.

"This was my fourth day at Berns and people told me that nothing ever happened there," Pascal said. "And then this is how it turns out. It's just totally crazy."

Aftonbladet has tried to reach Axl Rose through the concert booking agency Ema Telstar for a comment, but with no luck.

"I hold no grudge against him," Håkansson insisted. "I just did my job and did it well. It was nothing personal against me — it could have happened to anyone. It's just by pure luck that it wasn't one of the girls working in the reception that was harmed."