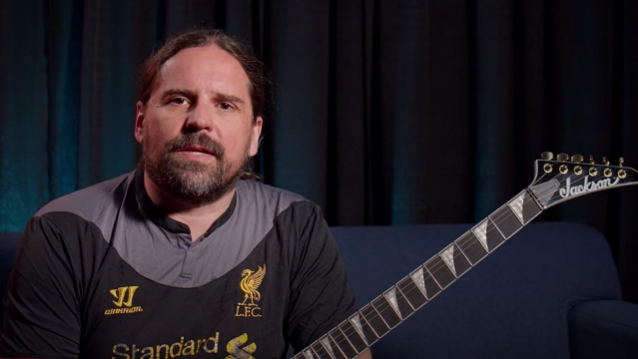 SEPULTURA's ANDREAS KISSER: 'The First Song I Learned On Guitar'

In the latest Jackson "First Song I Learned on Guitar" clip for #metalmonday, SEPULTURA guitarist Andreas Kisser shares his recollections of getting hooked on guitar, his first guitar and how he learned to play the instrument.

"Listening to albums is where I really trained my ear," Kisser said. "I studied acoustic guitar and Brazilian music, the theory and other stuff, but with heavy music and rock and roll, listening to the albums — vinyl and cassette tapes, and really trying to learn the songs.

"The first song that I really managed to listen to an album and transpose to a guitar was 'Grinder' from JUDAS PRIEST," Andreas revealed. "That album, 'British Steel', it's a very simple album, let's say, guitar-wise. It's a great school. It's a great first step into the world of metal: 'Breaking The Law', 'Living After Midnight', 'Metal Gods' and, of course, 'Grinder'. It's very simple stuff, very simple riffing, and very effective. So I started there."

Last year, SEPULTURA launched "SepulQuarta", a weekly event where the band gave insight into its colorful history, took part in question-and-answer sessions with fans and performed music while in quarantine. Some of the musical collaborations, including those with members of MEGADETH, TESTAMENT, ANTHRAX, SYSTEM OF A DOWN, TRIVIUM and SACRED REICH, will be released as a full-length album next month.