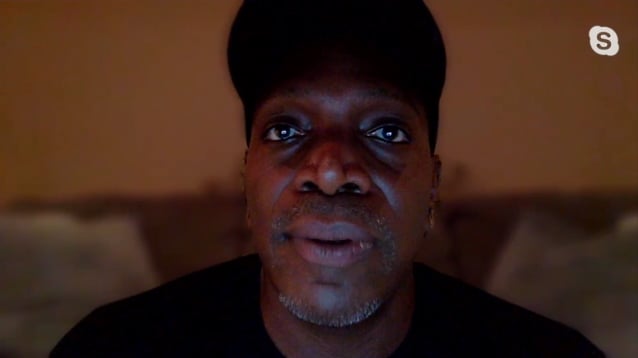 SEPULTURA frontman Derrick Green took part in a question-and-answer session with fans on Wednesday, April 1 via the Nuclear Blast Twitch channel. You can now see the full chat below.

Speaking about what prompted him to go vegetarian when he was just 15 years old, Derrick said: "My relationship [with the vegan lifestyle] started a long time with the actual idea of stopping to eat meat. It started when I was 15 years old. That was the last time that I had actually eaten meat. I stopped for numerous reasons. One, just because I didn't believe what people were telling me — at least friends that I know, at that time, that were vegetarians or vegans — and they were telling me that it would change my life. But I didn't really believe it — I didn't buy into that. I wanted to try for myself to see, because I had never questioned anything like that in my life, about what I was eating, where did it come from, why I was eating it. But when I stopped, I never went back."

He continued: "I just started with all the things that were very positive and all the things that were very negative. And there was a list of very negative things associated with that lifestyle. And I liked the way that my lifestyle had changed from stopping to eat meat, and it changed tremendously once I stopped with all animal products — dairy, and dropping that off, and then even with clothing and things like that. I started to see the importance of not supporting these companies that are creating these certain products that are unnecessary. I mean, I live in Los Angeles, and most people I know live in bigger cities, and we don't really need to rely on those different companies. I actually don't wanna support any of those companies — the agriculture company, these companies that are abusing animals. Why would you wanna give your money to something, a format or something like that, a destructive industry that doesn't care about you, doesn't care about the earth, doesn't care about the animals that are on the planet. So I just [did] a lot of thinking, and I just wanted to live a lifestyle by example of how I felt. And for me, it's always stayed true. And I'm always learning more and more about where I'm putting my money and questioning certain things around me. I think it's important for people to really question, and this started at a very young age with me, because I just don't believe everything that's put in front of me. A lot of things came from trying myself or questioning and going deeper with why I'd do certain things. So it's something I firmly believe, and I've seen the change. And it's changing for the better, I think, for a lot of people who are having a better understanding of the lifestyle."

SEPULTURA was recently forced to postpone its spring 2020 North American tour in the wake of the coronavirus (COVID-19) pandemic. The trek was scheduled to kick off on March 18 in San Diego, California and conclude on April 22 in Ventura, California. Support on the tour was supposed to come from SACRED REICH, CROWBAR and ART OF SHOCK.