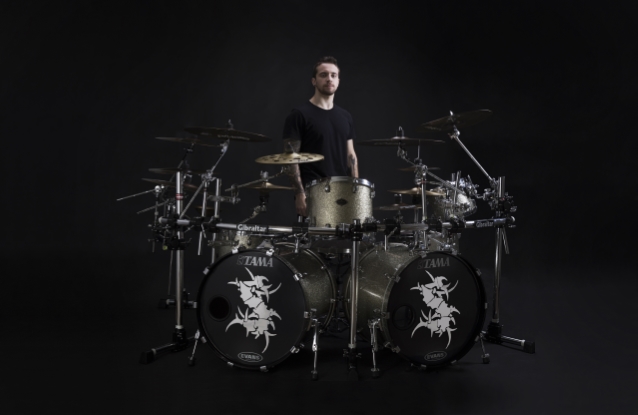 Drumtalk, the video podcast by German drummer and videographer Philipp Koch, recently conducted an interview with SEPULTURA drummer Eloy Casagrande. You can watch the entire chat below. A few excerpts follow (transcribed by BLABBERMOUTH.NET).

On what he enjoys most about drumming:

Eloy: "I think for all the musicians, that's something natural for you. I didn't choose the drums. The drums chose me. It was something natural. I didn't wake up one day and was, like, 'Now, I'm going to play the drums.' It wasn't like that. It just happens naturally. I think all the aspects of playing the drums, I think they are incredible. Maybe the coolest one, maybe it's not specifically with the drums, but to be onstage is something I really like — to have that connection with people and to give them energy and to receive back that energy. I think that's the coolest part of playing live and playing the drums. Drums can be energetic, especially the style that I play. It demands a lot of power, energy, so, I think the coolest thing is when you have that connection and you stop thinking about everything, you just go inside your music. You don't play with your brain, you're not playing with any kind of thought, you're just playing with your body. You respect the full nature aspect. That, for me, is the coolest thing. When that connection happens, I'm at my happiest point."

On whether he gets tired from drumming while on tour:

Eloy: "Oh, yes I am. You're playing a full set every night. We had only three days off, I think. Twenty-six shows. We are now getting a day in and everything gets more complicated and exhausting."

On whether it is hard for him to maintain speed and accuracy on the drums:

Eloy: "It is. It's very demanding. It wasn't a choice that I had. I just happened to be that way. I always wanted to play hard, to play very intense, but it was not to impress the people: 'Oh, look at this guy. He plays so hard. He's smashing those drums.' It's not to have that specific response from the audience or from the fans. The thing is, that's my natural way of playing. I don't consider playing hard or hitting hard, I consider it an intense way of playing. It just stems from my way of playing and being. I just put myself on the drums and that's what happens. But I think because I also grew up listening to the old metal and rock musicians, rock bands, so, back in those days Bill Ward from BLACK SABBATH, I'm a huge fan of this guy. Also, Vinny Appice [BLACK SABBATH, DIO], Ian Paice from DEEP PURPLE. All those guys, they didn't care about technique or movement. They just wanted to play the drums. Hit it. Play a natural instrument that comes from earth. That's something I try to be in tune with today. Like I said on the first question, just to keep it natural, respect the body. Sometimes I don't respect the body as much because you're going over your limit. As I said, the shows we play are for 90 minutes or two hours sometimes, it's very demanding. I also have to demonstrate the power during the shows. If you give everything during the first songs, in the middle you'll be dead. In the beginning, you have to hold yourself, hold back. I'm also thinking, 'Hold, hold!' Then I can release the power during the full set. But it doesn't mean I'm playing with less passion. I'm always playing with the same passion, but sometimes you have to have a balance between the limit, the extreme drumming from 'Okay, maybe my body is not going to support that.' You have to have that balance. It's really difficult to achieve, but it's a fight I have every night. In the beginning, it was difficult to play like that every night. Through the years, my body has gotten used to it. It's not something that comes easily. I cannot play soft. That's something that's out of my playing. It's really difficult for me to bring down the volume and play quietly. It's impossible."

On what he adds to the tribal aspect of SEPULTURA's sound:

Eloy: "My first contact with the drums, I started playing Brazilian music. I didn't start playing because of rock music or anything like that. It would be after some years, like when I was 19, I had contact with rock, so I decided to go for it. In the beginning, I was just playing Brazilian music. That's something in our blood. You grow up listening to that kind of music. You may not want to listen to that, but occasionally, you have to listen to it. It's playing on the radio, it's on the television, your parents, your family, they're listening to this kind of music. It's something you have in your blood, your brain, somewhere. To put it out through metal music, it's something I wanted to do. SEPULTURA has all these styles. In the beginning, it was thrash metal, death metal, black metal. Then they changed it during the whole history, during the years. They had the 'Chaos A.D.', 'Roots' album that they brought a primitive sound. I think SEPULTURA is a band that fits that all these styles that you can put inside SEPULTURA music. You don't have to hold yourself to, 'I'm not going to show this to the band because it doesn't fit our style.' But everything fits in the band. I remember showing some crazy grooves, some grooves that are on the last two albums, some seven-tuplets, maracas, just crazy stuff, double-bass. And the guys are 'Okay, let's try it.' They are so open-minded. That's something that keeps you alive. I couldn't be happier in a band. They can play anything they want."

On whether the long-simmering feud between founding SEPULTURA members Max and Igor Cavalera and his current bandmates has any effect on him: