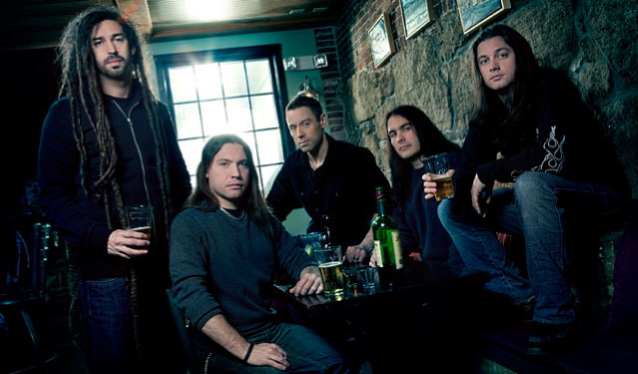 SHADOWS FALL Has Been 'Trying To Figure Out A Way To Play Some Shows', Says BRIAN FAIR

SHADOWS FALL singer Brian Fair has confirmed to the "Thunder Underground" podcast that there has been talk of the band becoming active again in some capacity. "We've been trying to figure out a way to play some shows and work it out," he said (hear audio below). "Schedule-wise, it's been pretty tough, just with [guitarist Jon Donais playing with] ANTHRAX, [drummer Jason Bittner playing with] OVERKILL, and Matt's [Bachand, guitarist] been busy, on and off, with ACT OF DEFIANCE and his own studio, and things like that. Me and Paul [Romanko, bassist] are working — well, were working — full-time [before the coronavirus pandemic]. Now it's real hard."

He continued: "We had some framework rolling to try and get some things kind of to the next level of really moving forward, and now it's all just at a standstill. But we really do wanna play some shows. We really stopped playing just because logistically, it was getting harder between guys playing in other bands, and then also just financially, if we wanted to survive, we were gonna have to tour 10 months out of the year, like we always did, and we just weren't at that point right then. I was having a kid, then had a second kid, Paul had a kid. So it just became too tough. But as far as playing together, we never broke up because we didn't wanna do it; it just didn't make sense at the time."