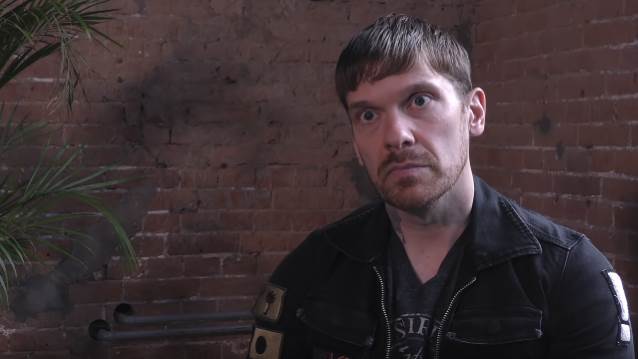 SHINEDOWN Frontman On 'Attention Attention' Album: 'I Think There Is A Massive Amount Of Genuine Substance In This Work Of Art'

Holland's FaceCulture recently conducted an interview with SHINEDOWN frontman Brent Smith. You can watch the entire chat in two parts below. A few excerpts follow (transcribed by BLABBERMOUTH.NET).

On his early musical upbringing:

Brent: "The thing was for me, when I was 10 years old, I kind of figured out exactly what I wanted to do. I feel very fortunate. I didn't really search to ask myself what I wanted to do for a living or how I saw my life. I kind of noticed that at 10 years old, I could write down what I thought and I could put it in song form. Then, right about the time I was approaching probably 14, 15 years old, that's when I really started to notice that maybe I want to sing. I kind of think back to that era, too, because that had a lot of really, really great teachers who taught me how to sing with these albums. I remember being 14 years old, my parents would go out, they would always go out on Friday nights because that was their date night and the garage in the house we lived in, had a really good reverb. I remember singing 'Appetite For Destruction' from GUNS N' ROSES back to back. I would do it and do it until I could hit every note. There were a lot of key moments. But I've got to give some credit to my father. Because when I was 15, my dad gave me a tape, an anthology tape of a guy named Otis Redding. That opened up this completely different door because Otis Redding got me to Nina Simone and Nina Simone got me into Ella Fitzgerald, which got me to Billie Holiday, which got me to Marvin Gaye, which got me to Sam Cooke, which got me to Percy Sledge. This whole world of R&B and Motown kind of opened up and I went backward a little bit from that. I found out about this band from Birmingham named BLACK SABBATH, then I kind of figured out about LED ZEPPELIN. I was 24 years old before I ever listened to a BEATLES record. The first BEATLES record I ever listened to front to back was 'The White Album'. I was 24 before I heard it."

On his musical development:

Brent: "I've always looked as rock and roll as a way of life. I don't really look at it as a genre of music. It's bit more of a spirit in a lot of ways. That community from, ever since I could remember, were always very welcoming. It didn't matter what color of skin you had. Didn't matter your religion; didn't matter how young and old you were; didn't matter if you were a man or woman. Everyone was welcome. I never pigeonholed myself either from a musical standpoint. But, I'm very centered in regards to music. There's a difference with me in songs and music. So, when I think of songs, I think about all the dynamics that make the melody and make the musicianship, so, that attributes to not only the playing, but also the lyrical content and the melody, so my pallet is pretty wide, pretty broad. I don't subscribe to just one style of music. I listen to a lot of different styles."

On the lyrical themes of the band's new "Attention Attention" concept album:

Brent: "It's recognizing the scenarios that have been put in front of you. It really comes down to I don't want people to be afraid to fail. I don't want us as a people, as human beings, I don't want us to lose our humanity either. What me and you are doing right now, we're having a conversation, but we're also having a conversation not looking down at a smart phone, texting to each other. I know we live in a very technologically advanced world right now, but I don't want people to lose the connection with each other with just being able to be in front of someone and talk to them and look into their eyes and watch their body language and listen to them. I think that a lot of people, because there are so many options now, because of technology and social media and what have you, I also think social media and technology is a great tool. But, I think when certain people have aspirations for something for themselves and their life that are maybe bigger than them, they're told they can't do it or that they're no good or they shouldn't even bother. You should just be grateful for who you are and what you have. That's an interesting way of looking at life because already, you've pigeonholed yourself because you're listening to someone and you're not listening to yourself. Because if you want something bad enough, that's all on you. No one can stop you from going after it. But, I don't think people are prepared to fail and they think if they fail one time, that it's over. It's not over. If anything, it's just the beginning. I don't think you're going to be defined by your failures. You'll be defined by the fact that you did not give up. With 'Attention Attention', the whole idea behind this album was it's not a traditional concept record in regards to, take for instance 'The Wall' by PINK FLOYD or THE WHO and 'Tommy' or even 'Operation: Mindcrime' by QUEENSRŸCHE, those are very specific concepts with certain people's characteristics and certain places and everything has kind of a title and a name. 'Attention Attention' is a little bit more ambiguous. It's not necessarily a concept record, it's a story album."

On SHINEDOWN "going deep" for the concept of "Attention Attention":

Brent: "I think that was necessary, honestly. I think 'Attention Attention' is necessary, though. I think that there is a massive amount of genuine substance in this work of art. I call it a 'work of art,' because that's what it is. Once again, this is our interpretation. Four gentlemen and these are our thoughts. The only thing is that none of this was made up. This album was not pulled out of thin air. This album is about us, but I think it's about a lot of people also. We wanted to make something that would stand the test of time and we wanted to make something that the world said needed to be made. I feel like that's what we've done with this album."

"Attention Attention" was released May 4 via Atlantic Records. The follow-up to 2015's "Threat To Survival" marks SHINEDOWN's first full-length effort to be produced entirely by bassist Eric Bass.

SHINEDOWN will join GODSMACK for a co-headlining North American trek which kicks off July 22 in Clarkston, Michigan and will make stops in Los Angeles, Las Vegas, Dallas, Atlanta, New York and many more before wrapping September 2.