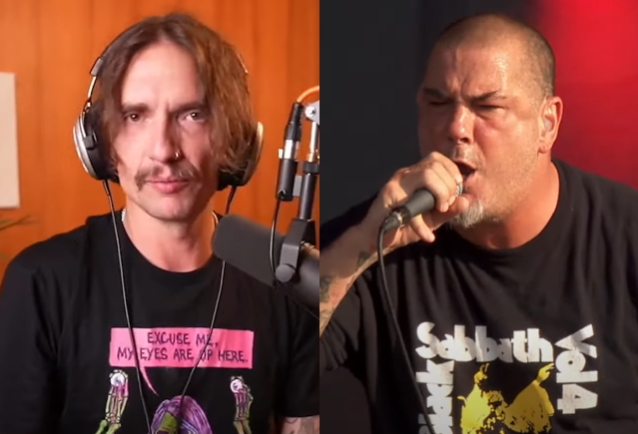 Should PHILIP ANSELMO And REX BROWN Tour Under The Name PANTERA? THE DARKNESS Singer Weighs In

THE DARKNESS frontman Justin Hawkins has weighed in on the news that PANTERA's surviving members Philip Anselmo (vocals) and Rex Brown (bass) will unite with guitarist Zakk Wylde (OZZY OSBOURNE, BLACK LABEL SOCIETY) and drummer Charlie Benante (ANTHRAX) for a world tour under the PANTERA banner.

Hawkins, a 47-year-old British-born rocker who currently lives in Switzerland, discussed his views on the PANTERA comeback via his YouTube series "Justin Hawkins Rides Again" where he shares a mixture of serious musician analysis and fun hot takes to his 168,000 subscribers.

In the description accompanying the release of his video commentary, Hawkins wrote: "Big news for PANTERA fans with the announcement that they plan on reuniting for a tour, as PANTERA, despite Dimebag Darrell & Vinnie Paul no longer with us. This has been received with mixed feelings from PANTERA fans, they don't believe they should tour as PANTERA without the Abbott Brothers but rather as a tribute act. Is this an overreaction? Should the surviving members of PANTERA be allowed to tour as PANTERA or is it disrespectful after everything that's happened?"

In the 11-minute video, which can be seen below, Justin stated in part (as transcribed by BLABBERMOUTH.NET): "What is the problem here? It's PANTERA, isn't it? It's the surviving members of PANTERA. I know that two of the most iconic people in that type of metal are no longer with us, so they can't do it. So I think what the fans are saying PANTERA should be allowed to rest in peace now. And actually, there's something about that that makes sense. Maybe they should call it something else. Maybe it should be called 'The surviving members of PANTERA featuring' and then say Zakk Wylde and the other guy. Or maybe just don't do it. I don't know. I'm just playing devil's advocate here.

"I can understand the conundrum, because on one level, it's their right; it was their band," he continued. "Why wouldn't you go out and just do that? But at the same time, there's something about the legacy of PANTERA; this is one of those bands where that actually matters, I think. So maybe they should call it something else. I'm not suggesting they shouldn't do it. I always think about QUEEN in this instance. Why shouldn't Brian May and Roger Taylor go and play those songs as QUEEN featuring Adam Lambert or Paul Rodgers or whoever it happens to be. Of course they should do that. Why would you begrudge somebody the opportunity to go and play their own songs as their own band under those really awful circumstances where the people that you'd like to be performing and see performing just are no longer with us."