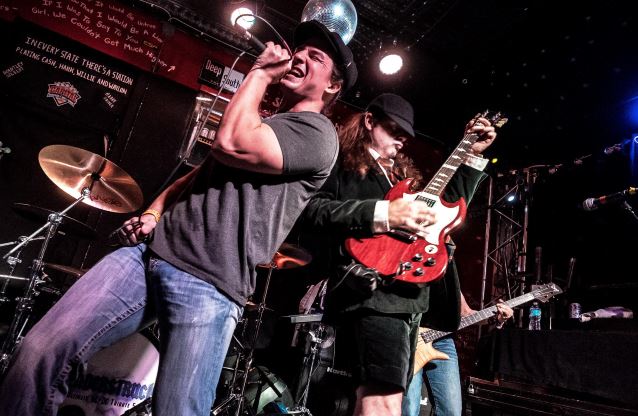 The first thought running through Lee Robinson's mind when he was asked if he wanted to audition for AC/DC was that someone was playing an elaborate joke on him. Good ole boys from Butner, North Carolina just don't get called by booking agents in Los Angeles.

"If it hadn't been Jeff who called I would have hung up!" he says. He had to hear the message and details for himself. Telling his supervisor he had to go audition for AC/DC, he left work early and made the hour drive to his friend's in disbelief.

Jeff Young is the founder and school-boy outfit-wearing lead guitar player of THUNDERSTRUCK, an AC/DC tribute band from Raleigh. He received the initial call from CAA Ltd. and in doubt of the validity called the agency back. Jeff Young handpicked Robinson to front his re-envisioned tribute to his idols after hearing the young man sing "Highway To Hell" at a local biker bar. The then-24-year-old had never fronted a band and had doubts he could do the gig. But Young only had to hear one song and knew the kid was the one.

That was just two and a half years ago. THUNDERSTRUCK, who bill themselves as the most authentic-sounding AC/DC tribute show in the southeastern U.S., have steadily climbed in popularity with Robinson at their helm, learning not only the nuances of AC/DC but how to front a band along the way. The opportunity to audition for one of the most iconic rock groups in the world after such a short time was a concept too unbelievable to grasp. Five days later, Robinson found himself on the short flight to Atlanta to do just that.

"I didn't sleep for, like, three days," Robinson said. "I was studying the songs." Then he laughed, a little worried his mind would go blank face-to-face with legends. While having dinner with the crew the evening before the audition, he learned Brian Johnson always used a teleprompter and it would be at the studio. "When I heard that, I pretty much passed out. I didn't have to worry about forgetting the lyrics anymore!"

On March 14, he entered the Atlanta studio where AC/DC were conducting the auditions. After jamming with the road crew to warm up, Robinson finally met Angus and Stevie Young, Cliff Williams and Chris Slade; he was ready to rock.

But first, the Australians needed to eat. Seated on a couch between the two Youngs, he was served tea by Angus Young's wife, Ellen, as they ate burgers and discussed the journey that brought Robinson to Atlanta.

Bass player Cliff Williams discovered the THUNDERSTRUCK singer and suggested him as an option. "He hung with me the whole time. Cliff found us on YouTube!" Robinson said.

There was no doubt the band members had done their research. The fact that THUNDERSTUCK performed live in standard did not go unnoticed. The Carolina rocker was one of the few to audition in the same key the songs were written versus tuning down a half-step. "Stevie said, 'Hell yeah, that's the right way to do it' when I asked if we could do the audition in standard." Robinson continued, "but that's the only way I know how to sing it!"

After lunch the atmosphere changed to the business of rock. Robinson's uncertainty quickly melted away. "Yeah, once they started playing I was just excited and was just standing there like what the hell. I'm playing with AC/DC!"

They performed four songs before the band took a smoke break, leaving the crooner alone in the massive studio. Dwarfed by AC/DC's full accompaniment of live performance Marshall stacks and in the presence of greatness Robinson thought the audition might be over. But after the band re-enterred he realized he was just getting started.

For almost two hours, Lee Robinson, a construction worker from a small town in the Carolinas lived every AC/DC fan's dream. And it was loud. "Chris Slade hit the drums so hard I kept moving forward 'cause I thought it was Angus behind me!" he exclaimed.

Speaking of Angus Young, with Malcom Young's retirement the sole patriarch of this bastion of rock was a presence much larger than his slight stature would indicate possible. "Even just standing there playing in rehearsal he had enormous energy," Robinson described. Despite Young's uncontainable charisma he was reserved throughout the audition, leaving his thoughts until the end.

Performing all but two songs on the "Rock Or Bust" setlist, Robinson found the band eager to take suggestions. "They didn't want a Brian Johnson copy." Robinson said. "They wanted someone who could make it their own." In addition to the current tour set, Robinson belted out favorites like "What Do You Do For Money, Honey", "Given The Dog A Bone", "Sin City", "Guns For Hire" and a few more.

After the last song, Angus Young finally had something to say to the young rocker. "'Whatever happens,' he told me, 'you've got a helluva voice.'" said Robinson, still in awe of the moment.

Robinson flew home to North Carolina the next day, and waited. He had a gentleman's agreement with the guys. Until we say something, you don't say anything.

When the message arrived about ten days later, the outcome was not what he had hoped. The official announcement this week of Axl Rose being named as Johnson's replacement for the remainder of the tour swept the world like wildfire. And Robinson could finally share his experience.

Back home in the Tarheel state, Robinson found himself even more excited about THUNDERSTRUCK and the summer and years ahead. With dates currently booked in both North Carolina and Virginia, Jeff Young, Lee Robinson and the rest of the band are committed to their vision of giving an authentic, high-energy tribute to AC/DC fans. In addition to performing with THUNDERSTRUCK, Robinson will also be filling in for BACK IN BLACK's Darren Caperno on select overseas performances.

Even though he didn't get the gig, for one day Robinson got to stand in the shoes of Brian Johnson and Bon Scott and sing in the presence of heroes of rock 'n' roll. And if Axl Rose needs a break at the Greensboro show, well, they know who in the audience to call on.